Like a team in a science fiction movie, the six-lab squad funded by a 2017 MEDx Biomedical research grant is striking in its combination of diverse skills and duties. 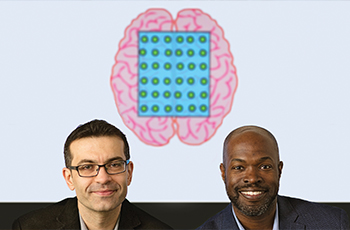 Dzirasa’s background in engineering informs his approach to the study of neuropsychiatric illness and disease. In the summer of 2016, he and members of his lab were discussing the challenge of precisely monitoring brain activity.

“We do not have the technology to monitor individual neurons interacting with each other on a large scale in real-time,” says Dzirasa. “All of our existing tools have limitations. We wanted to fundamentally change the paradigm of how information is taken out of—and put back into—the brain.”

Their question was: what is the best type of sensor to more accurately assess brain activity? Their answer: the brain. Their quest: build a biological brain that can monitor, activate, and potentially repair or enhance cell function in various parts of the brain.

“What we imagine is a framework made of the biological material that’s powered by blood, nutrients, and oxygen, and this framework will connect to the brain and to the outside world,” Dzirasa says. “It will be like a brain connection patch.”

Bursac’s experience using proteins to transfer electricity from one cell to another will inform the creation of the base, or “substrate” of the brain. “How cells electrically communicate within this system will be very important,” says Bursac.

Wang has experience in calcium imaging, which allows visualization of a large number of cells simultaneously, and Caron’s experience altering genes inform the understanding of neuronal communication. Kontos studies how blood vessels create new extensions, and his job is to explore how to vascularize the brain sensor to keep it alive. Last but not least, Leach was brought in for her expertise in building biomaterial frameworks that can keep cells that sense electricity alive.

Elizabeth Ransey, PhD, a postdoc with a background in biochemistry, coordinates the teams’ efforts.

Dzirasa imagines their project primarily in the context of understanding and treating disease and injury. Patients with psychiatric disorders and neurological illnesses such as depression and Alzheimer’s would be ideal candidates.

But another possibility involves the question of how human brains interface with computers.

“As it stands now, our brains interact with computers all the time, but we’re limited by pressing the buttons on our cell phone or typing on a keyboard,” Dzirasa says. “What if we could speed up the information transfer so that information can go directly into the brain, bypassing the eyes and ears? That’s a little bit more on the sci-fi side, but that future is not far off.”

The hope is to have a fully functioning prototype within the next two to three years. What will it look like?

“We haven’t figured that part out yet,” Dzirsa admits. “We’re bringing in the designers next. Nobody wants two heads.”