Finding a Path Together 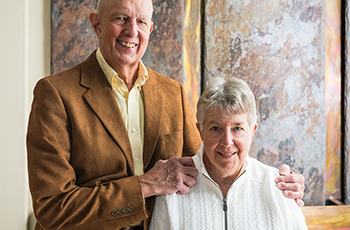 Ernest Borden, MD’66, had only been at Duke University School of Medicine for a week when he went on a blind date with a School of Nursing senior. They clicked, and after his internship in the Department of Medicine, he and Louise Borden, BSN’63, were married in Duke Chapel.

Duke set the Bordens on their professional paths as well as their personal ones. Er­nest built a successful career as a trans­lational cancer research investigator and prominent leader at institutions including the University of Wisconsin Carbone Cancer Center and the Taussig Cancer Center of the Cleveland Clinic/Case West­ern University School of Medicine. Louise became a nursing supervisor specializing in rehabilitation at university hospitals of Duke, Jefferson in Philadelphia, and Emo­ry in Atlanta.

The Bordens have expressed their appreciation for Duke’s role by giving generously to programs that reflect their interests. They support programs at the School of Medicine and School of Nursing that emphasize interdisciplinary collabo­ration, including pilot research grants in the Molecular Physiology Institute; clinical research experiences for Ph.D. students in the Duke Scholars in Molecular Medicine program; and a scholarship endowment at the School of Nursing.