Impacting the Lives of Patients through Venture Capital

Growing up in a family of physicians, Garheng Kong, MD’01, PhD’00, MBA’03, knew he would continue the family tradition and become a physician like his father, uncles, and cousins. “The joke in my family is that you have to be an MD before you do anything, even if you want to flip hamburgers at McDonald’s,” says Kong, founder and managing partner of HealthQuest Capital. 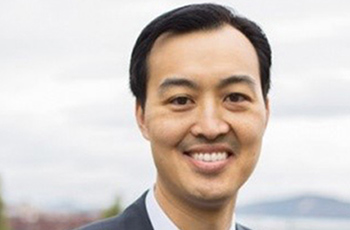 In 1995, after graduating from Stanford University with two undergraduate degrees in chemical engineering and biological sciences, he attended Duke’s Medical Scientist Training Program to pursue a medical degree and a Ph.D. degree in biomedical engineering. He was hoping to become a physician-scientist and conduct research that would develop a new drug, medical device, or diagnostic tool that could help thousands or even millions of patients.

But Kong’s career took a different direction. At Duke, for the first time, he started getting exposed to other areas outside of medicine—like the business. In fact, the person who introduced him to the business world was none other than Ralph Snyderman, MD, the chancellor for health affairs at Duke at the time.

Kong met Snyderman while doing his clinical rotation in internal medicine during his second year of medical school, and the two subsequently got together every month or two thereafter. “As I was thinking about my career, I had not considered alternatives outside of medicine and he said: ‘Of course you should consider academic medicine, but you seem like you have a good set of skills in both medicine and business. Have you ever considered a venture capital?,’” says Kong. “I didn’t know what venture capital was and the very first person who ever brought it up to me was the chancellor of an academic medical institution,” he says.

Snyderman introduced him to Tom Perkins, founder of Kleiner Perkins, the most famous venture capital firm in the world at the time, who got him interested in a career in investments. “I didn’t know who Perkins was,” says Kong. “I asked my friends from Stanford Graduate School of Business if they had heard of Tom Perkins, and they were like ‘have you ever heard of Michael Jackson?’ They could not believe that I had a meeting with him,” says Kong.

Kong also owes his transition to business to his Ph.D. mentor, Mark Dewhirst, DVM, Ph.D., who allowed him to work at Glaxo Wellcome and McKinsey & Company while pursuing his Ph.D. “Mark was a flexible thinker in terms of how to train a graduate student. As long as I was academically rigorous and scientifically productive working in his lab, he was open to giving me opportunities to understand what industry and the private sector looked like and helped me to find roles with those firms,” he says.

Kong completed the Medical Scientist Training Program in 2001 and pursued an MBA degree at Duke’s Fuqua School of Business. He has been in the venture capital industry for 17 years now, and he invests in innovative healthcare companies in the fields of pharmaceutical, medical devices, digital health, and diagnostics. Some of his investments include Castel Biosciences, which has developed a molecular diagnostic test that identifies metastatic risk for melanoma, and Trice Medical, which developed an optical needle that can diagnose joint injuries without an MRI and allows doctors to perform this procedure in their offices.

He believes that as an investor, he has a larger impact on the lives of patients. “My father, who practiced cardiology for more than 40 years, was able to help each of his individual patients, but I realized that as an investor, I can have an impact on many companies, each of which works on innovative or novel technologies that can help millions of patients,” says Kong.

Kong met his wife Melissa at Duke while both were in medical school. They got married in Duke Chapel and, following classic Duke tradition, on the first weekend of the month exactly a year before the wedding date, they pitched a tent on the steps in front of the Chapel. They camped out over the weekend, waiting in line with other couples hoping to reserve the day and time for their wedding in the Chapel.