A Career Dedicated to Helping Kids with Cancer

Through her bequest, the late Pat Sullivan provides scholarships like the one that gave her a start at Duke

According to family lore, Margaret Patricia “Pat” Sullivan M’50, HS’50-’52, arrived at Duke University School of Medicine in 1946 with just one suit. The Houstonian came from modest means, and she attended Duke, and previously Rice University, on a combination of scholarships, student loans, and diligent saving from jobs she took to finance her education. Sullivan’s years at Duke were life-changing. It, therefore, came as no surprise to her family that their beloved “Aunt Patty,” a longtime Davison Club member, eventually arranged to leave a large portion of her estate to Duke to fund scholarships for today’s medical students.

“I loved, and continue to love, Duke University and its medical school,” she wrote in Pioneers in Pediatric Oncology. “Upon my arrival there in October 1946, the leaves were in full color and the approach to the main campus, with it's imposing, utterly beautiful Gothic chapel, remains one of the most memorable vistas of my life.” Sullivan was one of two women in her class of 72; many of the others were war veterans. “They were a forthright, no-nonsense group — good friends all,” she wrote. 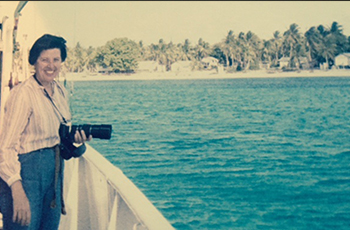 After pediatric residencies at Duke and in St. Louis, Sullivan spent two years with the Atomic Bomb Casualty Commission in Hiroshima and Nagasaki, Japan, performing health evaluations of children exposed to radiation. Her experience living in another culture ignited a lifelong love of travel, as well as some great anecdotes— like her shock at seeing Japanese men take their pants off on the train so they wouldn’t get wrinkled during the ride. Upon her return from her globetrotting adventures, she often “subjected” her family to lengthy slide shows, her nephew Gorman Thorp, MD, recalled with a laugh. Sullivan joined the new pediatrics faculty at the University of Texas MD Anderson Cancer Center in Houston and helped build the hospital’s pediatric oncology service. When she arrived at MD Anderson in 1956, the prognosis for children with leukemia or lymphoma was grim. By the time the dedicated clinician-researcher retired in 1987, these childhood cancers had become largely survivable, thanks in large measure to Sullivan and her colleagues’ efforts to discover and develop new treatments. She was known as much for her compassion and dedication to these children and families as she was for her medical acumen.

Sullivan was highly regarded in her field. She presented often at medical conferences and was a longtime leader in the American Medical Women’s Association. In 1973, she became the first woman honored with the Distinguished Alumna Award by the Duke Medical Alumni Association. Sullivan, who had no children of her own, was devoted to her siblings, nieces, and nephews.

When she passed away in 2015, she left the bulk of her estate to Duke University School of Medicine and MD Anderson. The fact that she designated a generous gift to Duke to fund medical student scholarships made perfect sense to her family. “Education was always very important to her,” says her nephew, who credits Aunt Patty with fostering his interest in medicine.

“For the holidays, she got each of us books, which exemplified her dedication to ongoing learning.”

Sullivan’s niece, Colleen Sullivan Taylor, agrees. “Aunt Pat was truly an incredible woman, with a thirst for life and knowledge. She was also very generous, and grateful for her education at Duke.”