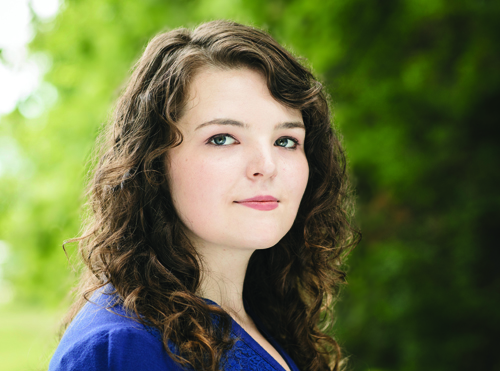 Buying a prom dress is an exciting, even iconic activity for some teens, but for Faith Newsome it was something much more meaningful. At 16, Sanford, North Carolina, native Newsome had had obesity for most of her life. But that changed the summer before her junior year in high school when she underwent bariatric bypass surgery at Duke.

Newsome was the youngest patient and only the second teen to have weight-loss surgery at Duke back in 2014. Like other adolescents with obesity, she had experienced her first two years of high school watching her friends enjoy activities most teens take for granted.

“I had always wanted to do organized sports, but you don’t want to be the kid on the team that nobody wants because you’re so much slower than everybody else,” she says. “I had my surgery in June, and by August I was on my school’s tennis team.”

Newsome is quick to point out that her decision to have surgery wasn’t just about pretty clothes and fun sports. She was pre-diabetic and had high blood pressure that factored in as well.

The Issue of Childhood Obesity

Weight-loss surgery doesn’t just happen by calling for an appointment and showing up for surgery. Newsome participated in the Healthy Lifestyles Program at Duke, a program that aims to help children achieve a healthier lifestyle to address weight-related health problems.

Sarah Armstrong, MD, associate professor of pediatrics and population health sciences, started the Healthy Lifestyles Program in 2006, motivated in part by her early career experiences in pediatric primary care in Baltimore. “I knew how to deal with ear infections and colds, but I didn’t know what to do with the obesity I kept seeing,” she says. She started researching the issue and eventually came to Duke to start a childhood obesity program.

“We get asked what causes childhood obesity, and the answer is that there is not one smoking gun,” she says. “In the majority of cases, it is not a single gene that causes obesity.” According to Armstrong, evidence suggests some epigenetic modifications happen (the mechanism in which genes may be switched on or off), as well as environmental factors and factors related to the gut microbiome.

Adolescent patients may be treated with lifestyle modifications, specific dietary protocols, or medication to help manage weight. And for the last six years, there has been the option of surgery at Duke as safe protocols of adult surgery have been adapted for youth.

Surgery has been increasing. From one or two a year early on, there are 15 to 20 adolescent patients in the surgical pipeline at Duke now, according to Armstrong. The procedures have gotten better, and a new technique, the vertical sleeve, has been introduced, so it’s much less expensive and has fewer side effects. Armstrong also advocates with insurance companies to make surgery even more widely available.

“We developed a screening process that we felt was safe and comprehensive to make sure the child is physically and emotionally ready for the procedure,” says Armstrong. Families are required to work with them six months prior to surgery to demonstrate the ability to make good lifestyle and dietary choices and adhere to them. While there is no age requirement, maturity is key.

Newsome appreciated the process. “When you’re younger, there’s a little bit of naivety that you’re going to have the surgery and then you’ll be just like your friends and won’t have to worry ever again, but that is the opposite of what happens. You are committing to lifelong lifestyle eating habits.

“I still gained my freshman fifteen when I got to college like everybody else, but when you’ve lost 100 pounds and you watch the scales go up, it is terrifying. I didn’t really get a grip on a healthy routine until I moved into my own apartment. Now I’m very confident because I have my own food.”

A Chance to Give Back

Newsome and Armstrong still talk. “Faith reached out to me and said, ‘I know I’m not in the pediatric world anymore, but I’d still like to stay in touch with you guys,’” says Armstrong. “She said she wanted to grow up and help other children with these issues, and she was looking for a summer internship, so I said come work with us.”

So Newsome spent the summer at the Healthy Lifestyles Clinic developing an adolescent patient support and advocacy program. She talked to adolescent medicine specialists about how their patients would best benefit from a program and has also been working with kids at Bull City Fit, the community outreach arm of the Healthy Lifestyles Clinic that provides free fitness and nutrition programming for patients and their families.

“I had an unbelievable summer full of growth and opportunity,” says Newsome. “I met so many people who have been excited about what I’m doing.” She has presented to local and even national obesity research and support groups.

Hope and a Voice

Newsome’s dream as a junior psychology and journalism double major at UNC-Chapel Hill is to partner with physicians and dieticians to treat adolescent obesity. She could have gone off to college and never mentioned her weight-loss surgery, but she feels she has a unique experience to share.

“I’m trying to be outspoken in the hope that somebody will feel a little less alone. I know childhood obesity is rampant in America, but I wasn’t really friends with anybody else who dealt with weight issues, so it was really isolating,” she says. “What I’m trying to do with this advocacy group is to give that sense that you’re not alone.

“After surgery, I felt like I finally had the freedom to be myself because there were so many things I had held myself back from.

“Weight-loss surgery changed my life. I have hope and I have a voice,” she says.  “I never take for granted the gift of weight-loss surgery because I can do things now I would have never dreamed of five years ago.”

I never take for granted the gift of weight-loss surgery because I can do things now I would have never dreamed of five years ago.