Vital Support for Families with Alzheimer's 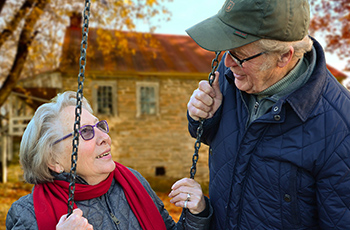 Nanette Hartley of Raleigh, North Carolina has two master's degrees and led an accomplished career in hospital administration and business. So when she suddenly started having trouble remembering simple facts such as dates of planned trips, her husband, Art Hilson, knew something was wrong.

Hartley was diagnosed with dementia, Alzheimer's type, in 2014. Hilson says that the Duke Center for Aging Family Support Program has been an “anchor” for him and his wife. “The Duke Family Support Program has given us a way to navigate the journey, a way to accept what's going to happen and how to deal with it," Hilson says. "It's a place where we can talk about it and share and help each other."

When Hartley was first diagnosed, she was still cooking and driving. Now she does neither. "The hardest thing has been to see Nanette get further and further away every day and every week," Hilson says. "The program has given us some stability at a time when we really had none. They have helped us navigate this journey in ways I had never thought possible."

The Family Support Program offers it services free of charge to families in the Triangle area affected by Alzheimer's and memory disorders. Those vital support services are expanding and will remain free, thanks to gifts totaling $3.1 million from an anonymous donor to the program. $1 million donated in April 2018 is the most recent of three gifts since 2015 from the donor, whose family has used the program.

"The donor is interested in making sure that the Duke (Alzheimer’s) Family Support Program and specifically its Early-Stage & Beyond Community programs exist into the future for families who are diagnosed and don't know where to turn," says Lisa P. Gwyther, MSW, LCSW, Director of the Duke Center for Aging Family Support Program and an associate professor in the Department of Psychiatry and Behavioral Sciences.

The initial offering of the Early-Stage & Beyond Community is an eight-week "Memory Makers" education and support group for families with a new diagnosis of Alzheimer's or the related disorder. Both the person affected and their family member learn together about the basics of memory disorders, as well as methods and skills to solve problems, and the importance of social support.

"We're unique in that all of our Early Stage & Beyond Community programs address both people living with the disease and their family member," says Bobbi G. Matchar, MSW, MHA, a social worker, and developer of the Early-Stage Community programs for the Duke Center for Aging Family Support Program.

Also offered are a monthly lunch at a local restaurant and a monthly art program at the Nasher Museum of Art at Duke University. These social outings at non-clinical venues help provide families normalcy and a sense of connection at a time when other friends and family may be backing away, Gwyther says.

Hilson said those connections have been a lifeline. "The eight-week program is the finest program. By the time the eight weeks are over, you really don't want it to end," Hilson said. "You have bonded so much with the people in your group. Then you go to the lunches and the Nasher outings, and before long you have two dozen close friends who know what you're going through."

The program also helped Hilson think about practical and legal concerns "I'm a lawyer, and I knew enough to have a will and a living will. But it had not occurred to me -- what happens if I die first? So we were able to get another lawyer to look through all of our documents to make sure that we were prepared," he says.

Many of the expanded offerings enabled by the anonymous donor, such as a series of "What's Next" workshops for families with the middle-stage disease, have been driven by requests from participants, Matchar says.

In addition, Gwyther and Matchar are working to develop materials for other communities to use to start their own support programs.

The Duke Family Support Program’s Early Stage & Beyond Community programs are available at no cost to anyone in the greater Triangle region diagnosed with Alzheimer’s or a related disorder regardless of where they are treated. To learn more, visit dukefamilysupport.org.

[Note: The accompanying photos are stock photos. We did not have this patient family photographed.]