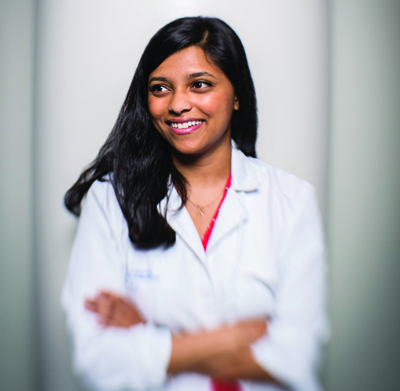 The first time Shree Bose saw a live beating human heart, it took her breath away.

She was on a surgery rotation, one of the clinical rotations that Duke medical students complete during their second year. Just a short while earlier, the patient had spoken with the medical team, expressing anxieties about the surgery. Now, with a few strokes of the surgeon’s scalpel, Bose could see the patient’s heart. It was a little mind-boggling.

“It helped me to realize that people are simultaneously really fragile and really resilient,” Bose says. “On rotation, we talk through anxieties with patients, but then, when you open them up and see their insides, you realize, they’re going to heal from this, they’re going to be just fine. So much can be fixed.”

Seeing the heart was a moment of wonder even for Bose, who has been working in scientific research longer than most medical students have—since the age of 15.

A Commitment to Science

Bose was just a teenager when her grandfather died from cancer. It was then that she made a commitment to study the disease in hopes of finding a cure, and she didn’t intend to wait until after high school. After contacting multiple people in her home state of Texas, Bose finally found a researcher willing to take on a 15-year-old—Alakananda Basu, a professor in the Department of Molecular Biology and Immunology at the University of North Texas Health Science Center.

Working in Basu’s lab, Bose found that an energy protein in cells is tied to the body’s resistance over time to a standard ovarian cancer drug treatment. The team inhibited the protein and found that cells once again responded to the drug treatment.

The discovery won Bose the grand prize in the first-ever Google Science Fair in 2011, beating out more than 7,500 entries. She also earned first place in the 17-18 age category. The prize included a $50,000 scholarship, which she used to attend Harvard University to study molecular and cellular biology.

The award catapulted Bose into the national spotlight. She was interviewed by numerous news outlets, including the New York Times, CNN, NPR, and MSNBC Nightly News. She’s been invited to give numerous TEDx talks, and Glamour magazine named her one of the nation’s “Top 10 College Women.” She got to meet President Barack Obama, whom she says she “bear hugged” out of pure excitement.

“It is always rewarding to see students succeed, and Shree’s success has been remarkable,” says Basu. “She has been extremely driven. I was also very impressed by her presentation skills.”

Early national and international recognition helped Bose realize the impact that scientists can have when they communicate effectively with the general public about their research.

“I think one of my favorite parts of doing really cool science is being able to share it, to help people who have no idea how cancer behaves understand how different therapies work,” she says.

She continued to grow her career in scientific outreach when she and friend and fellow student Mark Pavlyukovskyy co-founded Piper, a start-up company that distributes computer engineering kits to kids around the world. Bose and Pavlyukovskyy raised more than $10 million to support the initiative, and today the company is run by a team headquartered in San Francisco.

“At the end of my undergraduate education, I realized I had to make a choice about my future and the next step I wanted to take—whether that was continuing to work with Piper or apply to medical school,” says Bose. “I realized ultimately that what I want to do with my life is very much medicine.”

To Bose, Duke stood out as the best choice for medical school for two reasons: the School of Medicine’s philosophy of collaboration and the people here. Bose says when she visited Duke, every person she spoke with emphasized collaboration, not just within medicine but also in basic science.

“I remember hearing that and feeling that this was the place that really supported the sorts of crossovers I was looking for,” said Bose. “And on top of that, I found that most of the students I met were people who were genuinely nice and genuinely happy. And I wanted to be some place where people around me would be happy. Even at the most stressful points, my classmates are incredible… they blow me away. Somehow, even with all of the stresses of medical school, they’re just insanely nice humans.”

As a student in the Medical Scientist Training Program, Duke’s dual-degree MD/PhD curriculum, Bose has her work cut out for her. In 2018-19, during her third year, she will begin the PhD component of her program, during which she will join a lab and conduct basic science research. Bose is interested in specializing in cancer metabolomics research, the study of the aberrant ways cancer cells process energy, and how these processes might be targeted to stop cancer cell growth.

She has remained true to her mission of finding ways to stop cancer—not only in tribute to her grandfather, but because there is so much left to know, Bose says.

“The fact that we still don’t understand how cancer works is fascinating to me,” says Bose. “I still feel like I’m a 15-year-old reading about metabolism for the first time and being like, ‘Wait, why don’t we know more about this?’”

Despite the demands of medical school, Bose still makes time for science outreach. She has served in multiple roles on the board of the Science Review, a Duke student-run publication in which students tackle writing about scientific topics for a general audience.

Bose is also an ambassador for Girlstart, an Austin-based organization that offers a wide range of programs for girls to increase their learning opportunities in the Science, Technology, Engineering, and Math (STEM) fields.

“Getting more girls excited about STEM is something that I’m passionate about—not only because I’ve had incredible female role models along the way, but also because each generation of female pioneers paves the way for the next. It’s that cycle that sparks new ideas and innovation,” says Bose. 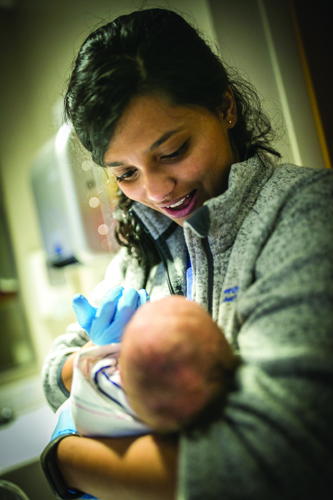 In January, Bose was asked by the Congress of Chile to speak at a national political event in support of science, where she emphasized the importance of creating forums for scientists and scholars from diverse fields to brainstorm new ways to cross-pollinate.

In March, her public speaking skills caught the eye of casting agency employees who asked her to audition for a series of Microsoft commercials. Bose traveled to Universal Studios in Los Angeles to participate in the shoot, in which she donned a white coat and explained how the new Windows 10 PC’s 3D visualization component allows her to share her research in exciting new ways.

“I was legitimately studying on the set, in the scenes where I’m shown studying,” says Bose with a laugh. She credits Duke School of Medicine faculty and staff for allowing her the flexibility to participate in the shoot and travel internationally to give talks.

“Everyone has been amazing to work with,” she says. “I don’t think I could have done something like this at any other medical school.”

“Shree came to Duke like many of the other students, with very diverse and unique experiences,” said Andrea Liu, assistant dean of admissions for the School of Medicine and Medical Scientist Training Program. “It’s our job to allow our students to express themselves in creative ways inside and outside of the scientific and clinical setting. Giving Shree this opportunity allows her to grow personally and professionally while also having fun.”

A Career at the Intersection

In Bose’s class of 119 students, only 10 are pursuing the MD/PhD track. The program, funded by a stipend from the National Institutes of Health, prepares students to pursue careers as physician-scientists once they graduate, with the skills to serve as physicians, basic science researchers, or both. Physician-scientists are especially valued in the workforce because, having trained in both the basic and clinical sciences, they are uniquely positioned to translate discoveries in the lab to treatments or cures.

The number of physician-scientists in the workforce has decreased across the nation in recent years, but Duke has recently taken steps to encourage and support students in the field, including the formation of a new Office for Physician-Scientist Development. Although it’s a long road, Bose thinks it’s the best career path for her.

“A lot of the mentors who I have admired and striven to emulate in terms of career paths have been MD/PhDs,” said Bose. “In seeing them, I realized that I wanted a career that is at the intersection—that’s not medicine, and not just basic science, but both.”

Looking forward, Bose plans to continue advocating for science and STEM education, as she says in her Microsoft commercial: “Half of science is about convincing the world that what you’re working on matters. I want to be making the discoveries that help people live better lives.”

Getting more girls excited about STEM is something that I'm passionate about--not only because I've had incredible female role models along the way, but also because each generation of female pioneers paves the way for the next. It's that cycle that sparks new ideas and innovation. 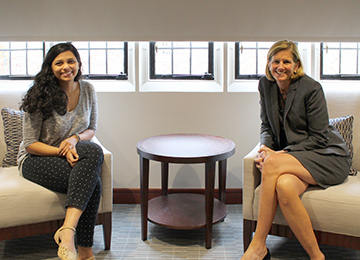 From One Duke to Another: Podcast Episode 2