Dorothy Sipkins, MD, PhD, became fascinated by leukemia during her medical training. She remembers studying a biopsy from an elderly patient who had just had chemotherapy and was in remission. “You couldn’t see any leukemic cells; the bone marrow looked clean,” Sipkins remembers. But she knew that because of the patient’s age, her cancer was highly likely to return. Before long, her bone marrow would likely be full of cancer cells. Where were these cells hiding?

“They’ve got programs of their own,” says Sipkins, who treats leukemia patients. “We are trying to understand their cellular program so we can be the puppet masters.”

Sipkins and another Duke researcher, Ann Marie Pendergast, PhD, are making progress in their quest to stop the spread of cancer, and turn it into a chronic disease rather than a deadly one. “Metastatic relapse—when cancer cells disseminate from their original site—is actually what kills most people who die from cancer,” Sipkins says. 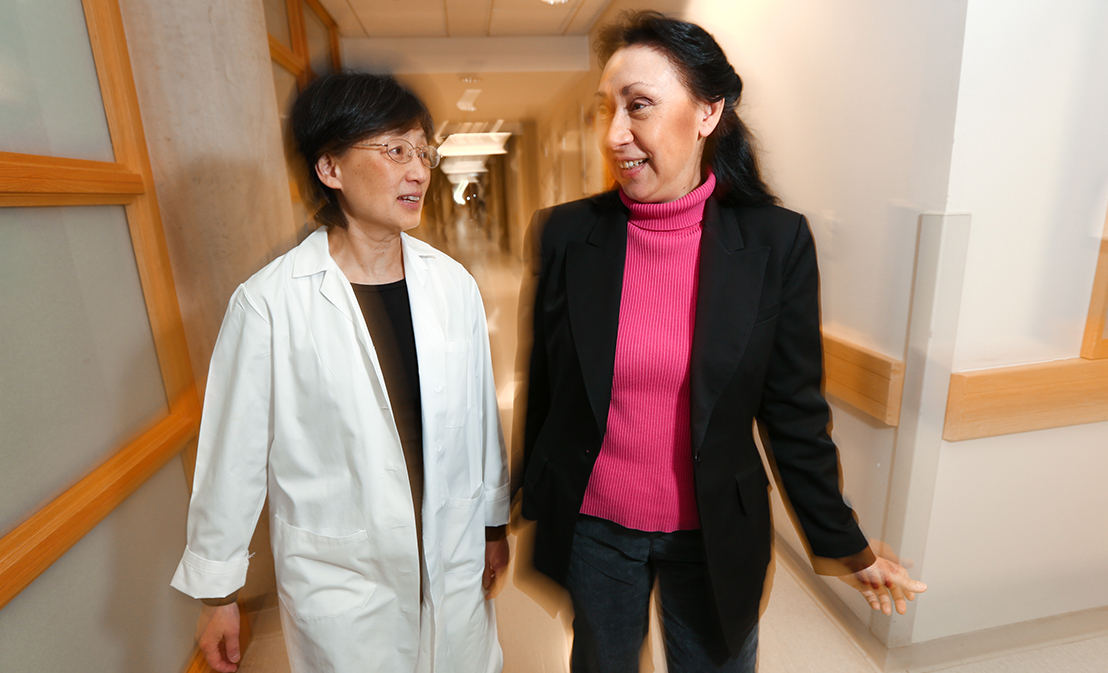 Because metastases can happen so fast, Sipkins needs to spy on cancer cells in real time. To do that, in mice, she and colleagues label cancer cells with fluorescent dyes and use laser scanning confocal microscopy to peer down into the bone marrow. Her research to understand leukemia and the bone marrow.

Her research to understand leukemia and the bone marrow has led her to study breast cancer, which likes to spread to the bone.

Sipkins is working with Duke breast cancer physician Kelly Marcom, MD, to develop a trial of a drug that blocks both of those molecules, for metastatic breast cancer patients. They hope to get their trial approved by the end of 2017.

A Calling Card for Metastasis

Another Duke researcher, Ann Marie Pendergast, PhD, may have found a way to stay one step ahead of lung cancer. If anyone could do that, it’s Pendergast. She exudes energy. When she starts talking about her work, the technical terms come out rapid-fire—ABL1, ABL2, extravasation. What it all means, and the reason Pendergast is so excited, is that she may have found a way to predict when lung cancer will spread, then stop it.

Pendergast has worked for years to understand a group of enzymes called ABL kinases. In normal cells, their function is to signal cells to move and invade. Normally these invasion promoters are turned on only when needed. Pendergast’s latest work has shown that some of these enzymes—ABL1 and ABL2—are plentiful and highly active during several steps in lung cancer metastasis.

That means that by testing lung cancer patients for levels of these enzymes (and some of the proteins that they turn on) she may be able to predict which patients will have a metastasis. Pendergast is applying for a patent for this “signature.”

Even more exciting, in mice, if Pendergast inhibits ABL1 and ABL2 with a drug, or removes them using genetic engineering, she can stop a crucial step in metastasis (extravasion—when cancer cells exit the bloodstream and push their way inside an organ). “The animals that have these kinases deleted from lung cancer cells survive for a long, long time, while the ones that do not are dying of metastasis,” she says.

Pendergast is working with oncologist Mark Onaitis, MD, (formerly of Duke, now at UC San Diego), to plan a clinical trial of a drug that blocks ABL1 and ABL2. The drug is already being tested against leukemia, but Pendergast’s work suggests that it may help fight lung cancer metastasis, too.

Dorothy Sipkins is associate professor of medicine and associate research professor in pharmacology and cancer biology.