AFTER A SCIENTIFIC MEETING IN NEW HAMPSHIRE IN 2017, breast cancer researcher Donald McDonnell, PhD, met his wife, Mary, in Maine for a week of vaca­tion. Sitting at a secluded inn on Anne’s Point, McDon­nell, Coleader of the Women’s Cancer Research Program at the Duke Cancer Institute, couldn’t stop thinking about what he had heard at the meeting.

He couldn't shake the thought that he and everyone else had been taking the same general approach to treating estrogen-receptor-positive breast cancer for more than 30 years.

What many breast cancer drugs have in common is that they stop production of the hormone estrogen or block its effects. Over the years, researchers have gotten better and better at developing anti-estrogen drugs, which interfere with the estrogen receptor in the cancer cell. Some bind to the estrogen receptor in place of the hormone, while others bind and "twist the receptor into an unnatural shape," McDonnell says. "The cell thinks it's a broken protein, then eats it.”

McDonnell’s own lab has had a role in the devel­opment of the majority of these drugs. That is no small feat: for many patients, the treatments hold the cancer at bay. In fact, in 2020, McDonnell was recognized with the Susan G. Komen Brinker Award for Scientific Distinction in Basic Science, the organization's highest scientific honor, for his contributions to improving understanding of estrogen receptor signaling, leading to development of novel endocrine therapies for breast cancer that is positive for the estrogen receptor.

But sitting there in Maine in 2017, looking at the calm water, McDonnell decided that he could do better.

“I decided that I had to get off the path I was on,” McDonnell says. "My group has done as good a job as we could possibly do developing drugs to stop the growth of breast tumors. What I want to do now is eradicate them."

That decision has led McDonnell, the Glaxo-Well­come Professor of Molecular Cancer Biology, to shift from “studying the breast cancer cell in a vacuum” to looking at therapies in the context of the immune system. Early findings from his team of collaborators show promise for finding treatments that are more targeted and effective than ever before.

Is This a Stupid Idea?

In 2017, when McDonnell got back from Maine, he started thinking about estrogen’s effect on the eight or nine different immune system cells that live outside the cancer cell. “Most of them also express the estrogen receptor,” he says. So when a woman takes an anti-es­trogen pill, it’s not only inhibiting the action of the hormone in the cancer cell, but in all of those immune cells. “We know that beating the hell out of the estrogen receptor in the cancer cell is a good thing, but is it a good thing in the other cells?” McDonnell says. “And the answer is, I don't think so.”

As these ideas emerged, McDonnell had doubts. He didn’t know much about immunology. Plus, by changing course, it would be like saying he had been doing things wrong all this time. But he has never been one to keep to the status quo. As a college student at the National University of Ireland, Galway, with a scholarship to study marine biology, he switched his plans after meeting his future wife and getting to know her mother, who was battling breast cancer. 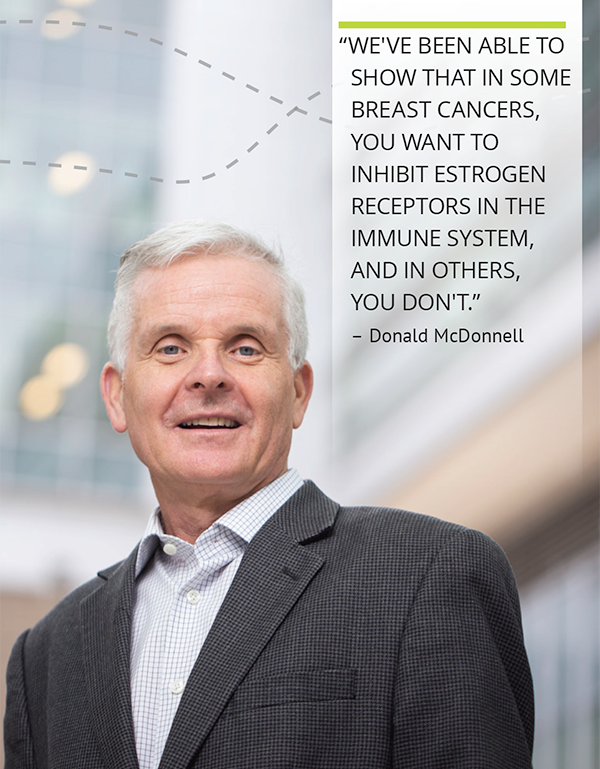 Chao, the Donald D. and Elizabeth G. Cooke Cancer Distinguished Research Professor at Duke, has extensive expertise in stem-cell transplant and in immunology. “I said, 'Listen Nelson, is this a stupid idea?’ And he said 'No, I think it’s worth looking at.'”

So McDonnell consulted his lab group, got their ideas, and wrote a grant application to the Department of Defense (DOD). Funded in 2018 with $7.3 million, the project involves McDonnell, his research team, and more than a dozen physicians, scientists, and staff from different departments at Duke, as well as researchers in genomics and drug discovery at UNC-Chapel Hill.

The researchers assessed in the lab whether the anti-estrogen drugs had a positive, negative, or neutral effect on the patients’ immune systems. The answer, which isn’t published in the scientific literature yet, is that it depends on the type of breast cancer and its immune profile. “We have defined about three different facets of immune biology that we believe the estrogen receptor regulates in an important manner in breast cancer,” McDonnell says.

“We've been able to show that in some breast cancers, you want to inhibit estrogen receptors in the immune system, and in others, you don't.”

Breast cancer types vary so much that it could be considered several different diseases, McDonnell says. So figuring out how to use this information will require more work, though other findings from his lab about estrogen and the immune system are leading to a more immediate payoff for other cancers.

In the third year of the four-year DOD grant, the team is moving to what McDonnell considers the main event: developing breast cancer drugs that keep their ability to stop growth of the cancer cell, but that don’t have bad effects on the immune system.

Step one: screen current estrogen-inhibiting therapies to find out which ones have the most favorable effects on immune cells. “There’s no way to change standard of care tomorrow. It will be a gradual approach,” McDonnell says. Step two: collaborate with Tim Willson, PhD, a research professor in the Eshelman School of Pharmacy at UNC-Chapel Hill, to create new drugs. “We now know the characteristics of the perfect compound. Now we just have to design it,” McDonnell says.

Whether it’s McDonnell’s team that creates the perfect therapy, or someone else, he believes that by collaborating across disciplines and focusing on enhancing the body’s own defenses, researchers are on the cusp of being able to cure breast cancer. “With immunotherapy, we have durable clinical responses in melanoma and lung cancer,” he says. “Although it is a more daunting task, there's no reason to my mind that we can't hijack the immune system to do the same thing in breast.”