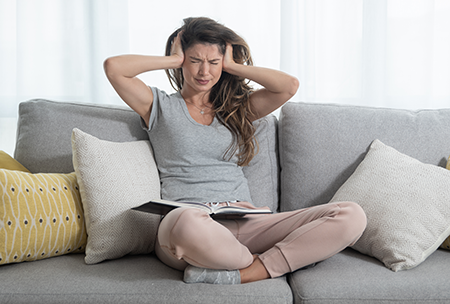 It happens almost every time Zach Rosenthal, PhD, talks to people, either individually or at academic gatherings or public lectures, about his field of study.

“Inevitably, as soon as I describe it, somebody says, ‘Oh my gosh, I think I have that!’ or ‘Someone in my family has that!’” says Rosenthal, associate professor in psychiatry and behavioral sciences at Duke University School of Medicine. “They just never knew there was a name for it. And they certainly didn’t know that Duke is one of the few places in the world studying it.”

It’s called misophonia, and it’s a syndrome in which certain repetitive sounds — often common ones such as chewing, throat clearing, or keyboard tapping — trigger an acute nervous system response that can take the form of intense and overwhelming anxiety, anger, or panic. In moderate cases, misophonia can interfere with normal daily activities; in severe cases it is debilitating, seriously disrupting work and school life, relationships, social activities, and more.

“Some people, for example, sometimes find it impossible to be around other people eating, or even to be around them at all,” Rosenthal says. “If they work in an open workspace, they’re anxious and distracted, often not performing very well. It’s like having a fight-or-flight response always turned on. Imagine having your nervous system keyed up and agitated all day long, every day. It’s incredibly stressful and can cause lots of serious problems.”

For a syndrome that seems to be fairly common — hence the response whenever Rosenthal describes it to people — remarkably little is known about misophonia. No one knows exactly what causes it, how prevalent it is, or what brain activity characterizes it. There are no standardized tests to reliably diagnose it, and no cure or evidence-based treatment.

Rosenthal is determined to change that. And, thanks to the support of some key philanthropic partners, in 2019 he and his Duke colleagues launched the Duke Center for Misophonia and Emotion Regulation (CMER), the only center in the United States dedicated to the advancement of research, education, and clinical services for people with misophonia.

“We don’t precisely know the prevalence of misophonia yet, but it certainly doesn’t seem to be rare,” says Rosenthal. “The best data so far suggest that as many as 12% to 20% of people report having moderate or higher impairment caused by misophonia. Most of those people just figure there’s something wrong with them, and they don’t know what it is, so they feel alone. We want them to know they’re not alone, and we’re working on finding new ways to help them.”

From the moment CMER was founded, its researchers have been vigorously pursuing research on numerous fronts, aimed at accurately diagnosing and characterizing the nature of misophonia, identifying factors that are likely to trigger episodes, evaluating the effectiveness of various therapeutic approaches, and so on. Rosenthal and his colleagues provide evaluation and consultation for patients with misophonia, and CMER has launched a quarterly webinar series in partnership with the International Misophonia Research Network to offer education and guidance for clinicians, researchers, and people affected by misophonia.

All of this is possible due to philanthropic interest and support, especially from two key supporters. The first is Jennifer Brout, a psychologist based in New York and the director of the International Misophonia Research Network. She first contacted Rosenthal more than a dozen years ago when he was studying emotional reactivity and subsequently became both a scientific colleague and a philanthropic benefactor, establishing the Duke Sensory Processing and Emotion Regulation Program in 2008.

A pivotal five-year gift last year from another donor — a family that wishes to remain anonymous — enabled Rosenthal to transition the Sensory Processing and Emotion Regulation Program into CMER.

“Jennifer Brout really helped set me on this path in the first place, and she is an extraordinary colleague and friend to Duke,” says Rosenthal. “In fact, she’s the one who referred this second incredibly generous family to us, and they have given us the opportunity to start this program and seek additional partners. I am forever in gratitude to both of them, because without them this wouldn’t be possible.”

Rosenthal and his CMER colleagues have created two diagnostic tools, one for self-reporting by individuals and the other for use by clinicians and researchers. Andrada Neacsiu, PhD, assistant professor in psychiatry and behavioral sciences at Duke, is conducting research exploring possible changes in the neural circuitry of the brain involved with misophonia. Another CMER study is assessing the degree to which external factors such as time of day and environmental cues play a role. CMER is compiling a “sound bank,” or library of the sounds that trigger episodes, and exploring possible links between misophonia and other medical and psychiatric conditions such as tinnitus, hypertension, or anxiety disorders.

“One of the mysteries is that misophonia often correlates with a number of different disorders, but it is not related to any specific one,” says Rosenthal. “And some people don’t have any other apparently related medical history or psychiatric diagnoses, but they do have misophonia. So there’s quite a large spectrum, and we’re trying to get a better handle on that.”

He is also trying to get a handle on which existing therapeutic approaches might be most beneficial for people suffering from misophonia. Thus far, cognitive behavioral therapies (CBT), used for a wide range of psychological disorders, seem to help many people better cope with the symptoms of misophonia.“Every case is unique, but often people can manage better by addressing associated issues,” Rosenthal says. “One person might say, ‘I can’t focus on work because I’m always obsessing about the possibility of being triggered.’ Well, the main problem there is what we would call hypervigilance. We have evidence-based CBT interventions for hypervigilance, and we can treat that. It might not make their misophonia go away, but it can still improve their quality of life. Research is essential, but we can’t wait decades before we start helping people. We have to take what we already have and adapt it to help people now.”

For more information or to learn how to help, please contact Morgan Pope, Director of Development, at morgan.pope@duke.edu or 919-451-5093.

This story was originally published by Duke Psychiatry & Behavioral Sciences.