Sally Morgan strides to the top of a treadmill, swinging her arms. She wears a head piece that  anchors a plastic tube that snakes from her mouth. A sensor inside the tube measures the oxygen she takes in and the carbon dioxide she breathes out.

Morgan, who was diagnosed with chronic lymphocytic leukemia (CLL) in 2019, is taking a clinical progressive exercise test after participating in 12 weeks of high-intensity interval training. She has no symptoms from the disease and is in a “dynamic monitoring” period, which means she isn’t currently receiving treatment.

She says the exercise training has made her feel better and have more energy. And she moved up a level on her tennis team.

Can it also help her keep the cancer at bay?

That is what Assistant Professor in Medicine David Bartlett, PhD, is trying to find out. He and other scientists have a hunch that exercise, in essence, acts like an immunotherapy— a treatment that boosts the body’s own ability to fight cancer. Bartlett’s early findings look promising, and if he can find support to do more and larger studies, he hopes to add exercise to the toolbox of personalized cancer treatments that doctors can prescribe.

Readying for a Fight

Plenty of evidence shows that exercise makes people generally less susceptible to disease, including cancer. And, Bartlett says that colleagues in the United Kingdom are finding that lifelong exercisers have an increased ability to produce new  immune system cells, compared to sedentary people.

Bartlett aims to put a finer point on how exercise may be able to help the body fight cancer.

He explains that during the minutes we are exercising, cells that fight off invaders—Natural Killer cells and T-cells— temporarily rush from the lymph nodes and other tissues into the blood. Bartlett points out that some people think that evolution favored this phenomenon in our ancestors; if you saw a lion or other predator and began running, survival was more likely if the body sent infection fighters to the blood, preparing for a bite wound.

If exercise readies the immune system for a fight, what better way to prepare for what is likely the fight of a person’s life—cancer?

Bartlett and Associate Professor of Medicine Mike Harrison, MD, are investigating whether an “acute dose” of exercise boosts the effectiveness of an immunotherapy treatment. People with bladder or kidney cancer ride a stationary bike while receiving a 30-minute infusion of a checkpoint inhibitor—a drug that removes the “brakes” from certain immune system cells so they can recognize and kill cancer.

Bartlett is still analyzing initial results from 15 patients in that study, so he can’t reveal much yet, but he is excited about his early findings. “We may have the potential to be able to use exercise to shift your immune system around just enough that it’s working with the drugs that you’re getting, to treat your tumors,” he says. If all goes well, he will seek funding to conduct a larger study with more patients.

Right now, a single stationary bike sits on the fourth floor of the Duke Cancer Center; Bartlett’s team rolls it around to whatever infusion bay is empty. Curtis Garbett, who is fighting bladder cancer with Duke’s help, is raising funds to change that. What if there were a whole room of bikes where patients could pedal and talk to each other while receiving treatment? Garbett, who was one of the first patients to participate in the study, is beginning to raise funds for bikes, which cost $5,000 each, through the foundation he founded to raise awareness about bladder cancer—the Crush it for Curtis Foundation.

“Participating in the study gave me a feeling of empowerment over cancer,” Garbett says. “Even though the study may not directly impact me, I felt I was doing my part to advance cancer research and the way infusion therapy could be delivered in the future.”

As a junior faculty member, Bartlett puts in long hours analyzing data and writing grant proposals. He and his wife also have a young baby at home. So he doesn’t have the time he once did to participate in 12-mile extreme exercise events like Tough Mudder. Instead, he does simple high intensity interval training of his own. At nearby hiking trails, he sprints for two minutes or so until he’s exhausted, then slows down for about a minute, until he can go full bore again. Thirty-minute sessions like that give him similar benefits as longer periods of moderate exercise, he says. 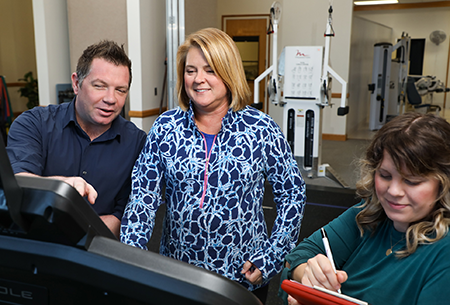 It’s not too different from the training that the participants in the CLL studies, like Sally Morgan, do under supervision at the Duke Center for Living. They work at 90 percent of their maximum cardiorespiratory ability for one-minute intervals, then one minute of active rest, for 30 minutes at a time. Because the exercise is tailored to their baseline fitness level, it’s not as intimidating as it might sound. “For many people in our study, high intensity interval training is walking up a hill, or walking up and down stairs,” Bartlett says. With the speed and incline, Morgan says, the sessions were more challenging than she expected. “I was definitely in much better shape by the end of it,” she says. Ideally, the training will teach the participants the exercise intensity they need to maintain the gains they’ve made.

“What I really want is at the end, they're able to go back into their community and do it themselves,” Bartlett says.

Because CLL has not been linked to obesity the way some other cancers have, the effect of exercise is little studied in this disease. Collaborating with Assistant Professor of Medicine Danielle Brander, MD, and Medical Instructor Andrea Sitlinger, MD, Bartlett found some surprises. First, they conducted physical functional testing in 140 people with CLL. Then they compared immune system cells from the 10 most fit patients with cells from the 10 least fit. “We found that the fitter people have a completely different immune system than the unfit people. They have different levels of circulating factors that can affect their leukemia cell biology,” Bartlett says. And, when he incu­bated the blood plasma of the patients with tumor cells, the blood from the fittest patients slowed the growth of the tumor cells better than blood from other patients. These preliminary findings won Bartlett a young investigator award from the American Society of Hematology to continue this work.

The team also found that, overall, people with CLL scored lower on function tests than people their same age without the disease. And when the patients received strength training, they became stronger, but the degree of change was not as great as Bartlett would have expected. In previous studies, he saw people with diabetes achieve a 15 percent increase in fitness level, and people with rheumatoid arthritis averaged increases of 12 percent. But people with CLL have showed smaller gains.

“This implies that the exercise is having an effect, but their cancer is probably causing them to be physically unfit to some degree,” Bartlett says. “If that’s the case, can we intervene to stop that happening?” He wants to one day be able to measure certain markers in the blood that pinpoint whether a particular patient’s frailty and decline is caused mostly by their cancer, or by normal aging.

In the meantime, Sitlinger and Brander says that the exercise training is helping their patients feel better. Sitlinger was overjoyed to see one woman who had previously used a cane start coming to her appointments without one. They also hope to find that exercise can improve the course of the disease. About 80 percent of patients with CLL will need treatment at some point, but many may wait years to start. Treatment is not recommended until the patient reaches certain param­eters–extreme fatigue, increased rates of infection, enlarged spleen or lymph nodes.

“We don’t want to wear treatments out, so to speak,” Sitlinger says. “And we want to delay the time until a patient develops resistance to treatment.” This period of “dynamic monitoring,” as Brander calls it, can be frustrating for people. Sitlinger says, “Patients are always asking, 'What can I do in the meantime to fight my disease?” Exercise may be a good answer.