Inside our guts, a teeming world of bacteria go about their lives. We are seldom aware of their presence, but they interact with us in countless ways and play a profound role in determining our health. In a way, they help make us who we are. 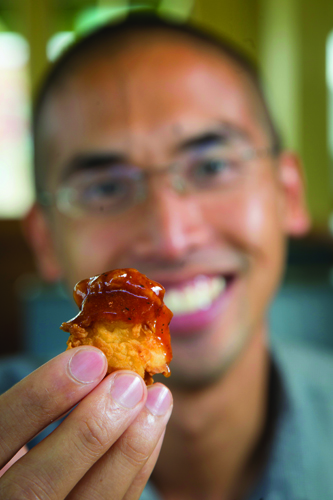 Lawrence David, PhD, studies this hidden world, the community of hundreds of different species of bacteria that make up each person's gut microbiome. To understand this highly complex environment and its inhabitants, Lawrence and his crew of researchers are rolling up their sleeves in the wet lab, writing computer code, and creating new statistical methods.

David showed a knack for creativity and dedication while he was still a graduate student at the Massachusetts Institute of Technology, where he and his mentor, Eric Alm, PhD, studied their personal gut microbiomes in unprecedented detail. This included collecting their own fecal samples every day for a year and tracking more than 300 other health and lifestyle measures, using an iPhone app that David customized (this was before Fitbits were ubiquitous).

Later, during his three years as a member of the elite Harvard Society of Fellows, David measured the effect of two very different, controlled diets in a small group of people. He found that eating certain foods to excess, such as meat and dairy, changed the microbiome dramatically in as little as one day.

Now, whenever David gives a talk about his work, someone will sidle up to him and ask, “So, what should I be eating for my microbiome?” David, an assistant professor in the Department of Molecular Genetics and Microbiology in the School of Medicine and a member of the Center for Genomics and Computational Biology, has mostly tried to sidestep the question. “Some research suggests fiber is good for it,” he might say.

He certainly doesn't feel that his own personal example qualifies him to give dietary advice. “I’m a fast food connoisseur,” he admits. Chicken nuggets are his obsession. “Whenever we go on a trip, my kids know we’re going to get some nuggets."

But lately David has decided that the future of his lab lies in tackling this very question — what people should eat to have a healthy gut microbiome. And, he says, the answer likely won't be the same for everyone.

"We all have different microbial communities inside of us," David says, sipping tea from Bangladesh (he brought it back after traveling there to study gut bacteria in the aftermath of cholera). "You and I probably share no strains of bacteria in common. As a result, each of us will respond to the same nutrient source in different ways. So we have to develop an understanding to account for that."

A Part of Us That is Not Us

Bacteria are not us. They maintain an entire ecosystem of their own. But they live inside our bodies, changing the properties of our gut and how it responds to food, medical treatments, and pathogens. For instance, bacteria control one of the basic characteristics of a healthy gut — that it's anoxic (free of oxygen).

"But there are all these bacteria that live on the edges of our intestine that make a living by breathing all the oxygen. So that oxygen never makes it to the middle of the intestine. And you just walk around carrying this fantastic ecological phenomenon inside of you."

David’s lab has found evidence that higher oxygen levels occur in the gut in the aftermath of nasty diseases such as cholera, as well as antibiotic treatment. He and his team are exploring whether elevated oxygen is simply a biomarker of disease or whether it's involved in the disease process.

He explores this and other questions in the complicated world of the gut by not only conducting hands-on experiments, but also developing the algorithms needed to analyze the enormous amounts of resulting data. "It's sometimes hard to develop algorithms as well as to do experiments,” David says. “But doing them in combination affords us a lot of flexibility and insight into how to control microbial communities."

A typical experiment yields a survey of a thousand or more different species of bacteria, observed in hundreds of different experimental settings. "So if you picture an Excel spreadsheet, that's a 1,000- by-1,000 matrix of data points," David says. "I'm fortunate to have in the group researchers who are gifted in terms of math and statistics, so we can take full advantage of the data we generate to build powerful models."

Research analyst and lab manager Heather Durand explains that the last time she did a genetic sequencing run, to identify bacteria by their genes, she ran 600 fecal samples at once, which yielded 24 million DNA sequences. "Advancements in molecular genetics, in high-throughput data computing, and in statistics have coalesced to make microbiome research possible," she says.

David has assembled a lab of people with wide-ranging expertise.

"It's really fun; people in my lab come from all over and have all different types of skills," he says. Durand is a clinical microbiologist, trained in identifying pathogens by culturing them. There's a molecular biologist. A biophysicist. A biomedical engineer. An ecologist. Someone with a PhD in materials science and engineering. David himself spent most of his MIT graduate years designing algorithms and writing computer code as part of his work modeling how genes of ancient microbiomes evolved. His undergraduate degree is in biomedical engineering, and his PhD is in computational and systems biology. But he's modest about his own skills. "I've tried to learn a lot of things, but wouldn't call myself a master of any particular field," he says.

A New Generation Every Hour 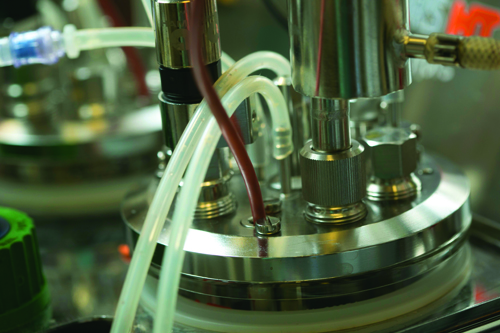 Because bacteria can replicate as often as every 20 minutes, ideally David would like to observe human gut bacterial communities that often. But because collecting human fecal samples is the only non-invasive method of gathering that data, that's just not going to happen.

"There may be some super donors who poop more than once a day, but generally we would expect to take only one sample a day," David says. "What results is not like a continuous movie; you’re just seeing snapshots once a day of what the ecosystem looks like. If the generation time for a bacteria is an hour, taking a fecal sample once a day is like a sociologist studying a human society but only getting to look at it once every 500 years."

That’s not a terribly realistic picture. The solution to that challenge? An artificial gut. There are various versions out there, but in David's lab, the artificial gut consists of a set of input tubes, a glass vessel, and a waste tube, all attached to a computerized monitoring dashboard that enables the scientists to simulate the large intestine. The researchers seed the vessel with a human sample, then digitally monitor in real time how the bacteria respond to different manipulations, such as changes in temperature, pH, oxygen, or nutrients. They can physically sample the bacterial community every hour or even every few minutes if they want to.

“We can recreate these really fine-scale timelines of what a microbial community does when you give it a drug or when we change the food we’re giving it," David says.

David's lab has four artificial guts at the moment. The small room that houses them will smell familiar to anyone who has ever lived near hogs or cows. "We haven't run samples for two months," says Durand, spraying a can of air freshener. "But it smells like we have."

Odors aside, "These artificial guts have turned out to be really helpful tools," David says. "We've found that often bacterial communities respond to diet or other changes much faster than within a single day. And you would never have seen that if you just used human subjects."

This type of creativity is part of the reason why, in his few years at Duke, David has been named a Beckman Young Investigator, a Searle Scholar, a Hartwell Investigator, and an Alfred P. Sloan Research Fellow. Last year, Science News named him one of “10 Scientists to Watch.”

How Many Compounds in a Chicken Nugget?

In the long term, David sees plenty of work ahead of him to figure out how to use personalized measurements of the gut microbiome to tailor diet to improve health or fight disease.

As he sees it, every day, when we eat, we are conducting a mini-experiment. “A drug contains only one compound," David says. "But in this apple," he says, picking one up off his desk, "there are so many different kinds of carbohydrates. It's a complicated problem to build a model and think about what's going to happen when I eat this apple."

It turns out there are nearly 30 compounds in that apple. In David's beloved chicken nuggets? If they’re from a typical fast food place, it’s around 40.

Even the commonplace advice that eating fiber is good for the microbiome is not very specific, David points out. "There are all different kinds of fiber. How granular do you need to get in order to tailor things to people? These are open questions."