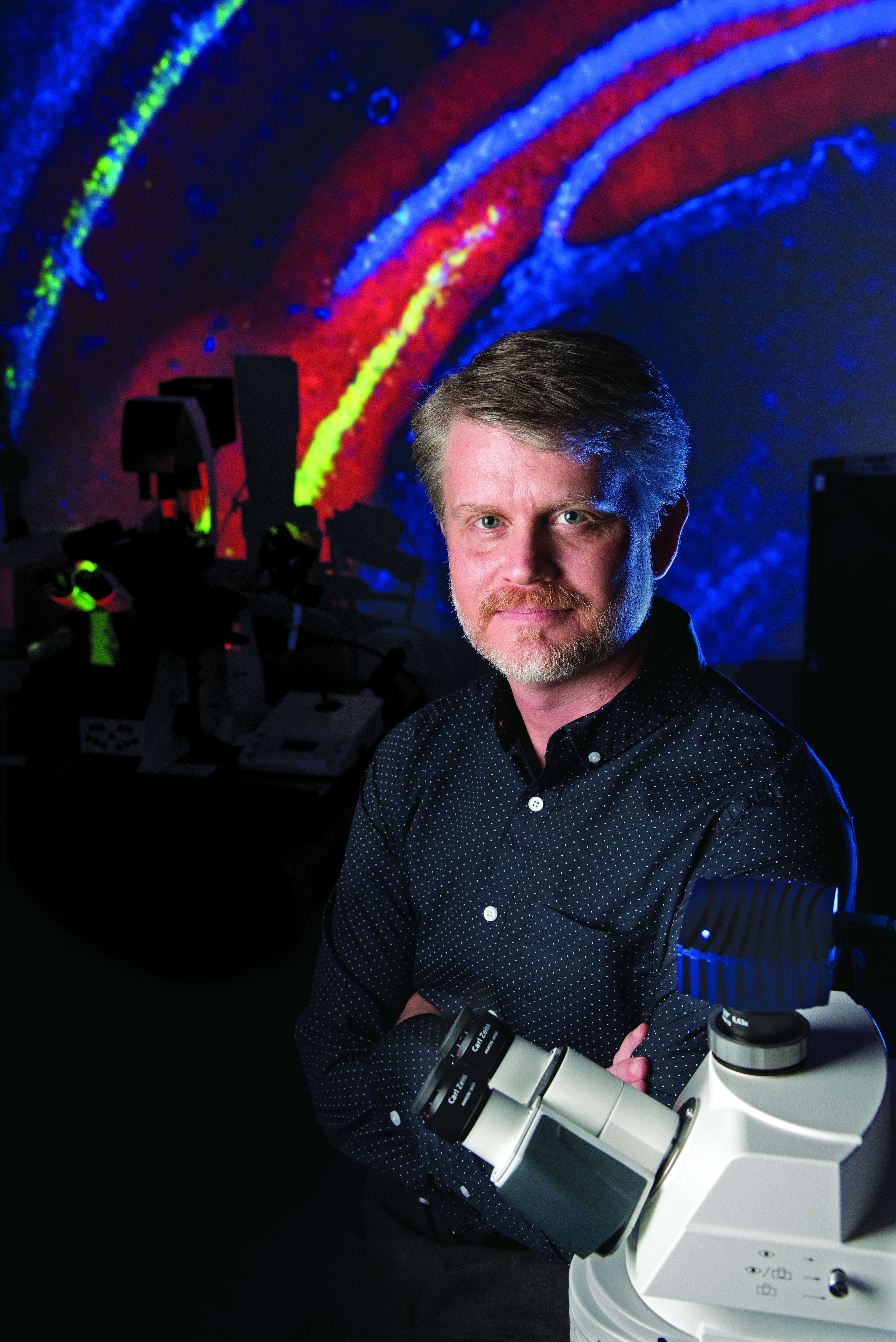 It’s not that he lies awake plagued by worries  or woes. On the contrary, the problem is that he’s so energized by the discoveries coming out of  his lab, and by the future paths those discoveries point toward, that he can’t wait to get in and start tackling the next step.

“We’re incredibly excited about the things  we’ve been doing here,” says Soderling, an associate professor of cell biology and neurobiology.  “And we have a lot of really cool stuff coming up ahead. The challenge is that we’ve opened up so many new areas of investigation  that we’re having to retool the lab so that we have the capability to functionally test them. I have a hard time sleeping at night thinking about  all the possibilities.”

Soderling studies synapses, the connections in  the brain where signals pass across the tiny gaps  from one neuron to the next. Neuroscientists believe that many, if not most, brain disorders  are caused by genetic mutations or other damage that disrupts the proper functioning of these connections. But many of the precise details of  the synapses—what they’re made of, how genetic mutations alter their functioning, why a specific malfunction leads to a particular disorder, and so  on—remain unknown.

Last year, Soderling and his lab developed a  novel and elegant technique for exploring some  of the most poorly understood aspects of the synaptic process. That research revealed a wealth  of data that dramatically increases what we know about how the brain works, and that new knowledge points the way toward exciting new  hopes for thwarting some of the most devastating neurological disorders.

What’s more, the technique Soderling  developed can be applied to other parts of the  brain as well, which should give him and other researchers unprecedented insights into yet more  neurological processes and disorders.

“It’s keeping us pretty busy,” he says. “We’re  thinking up new applications for this every week.”

Traffic Signals in the Brain 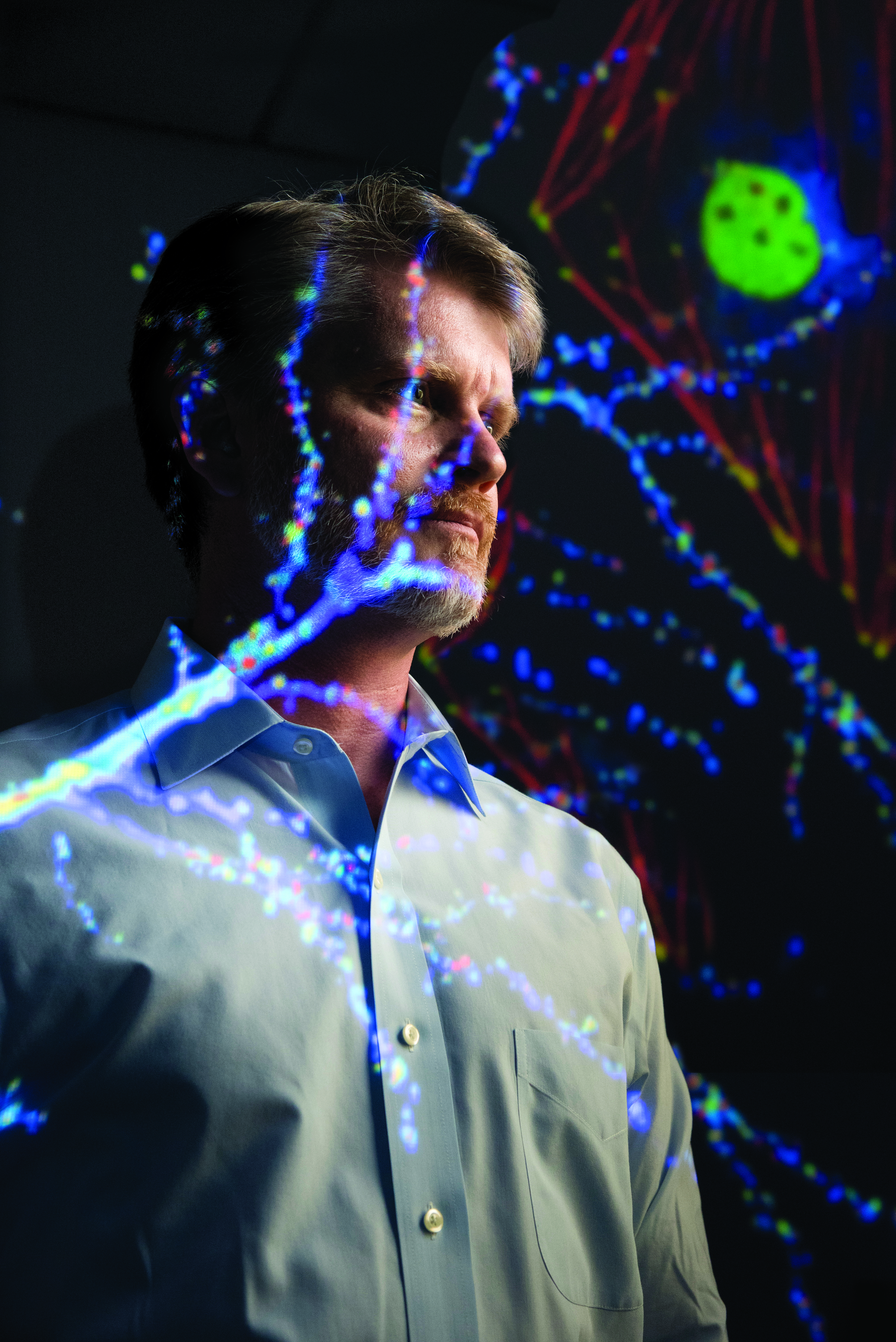 Scientists have known for more than half a  century that synapses come in two basic forms.  One type, known as excitatory, boosts brain activity, activating the flow of information  between neurons. The other, called inhibitory, dampens that activity. Soderling likens the two  types of synapses to traffic signals: excitatory synapses are like green lights, allowing neural  signals to proceed, and inhibitory ones are like red lights that pause that movement.

This inhibitory process is important in preventing  the brain from becoming overly active. Malfunctions in these inhibitory connections can  lead to excessive electrical activity in the brain, and many researchers think this causes brain  disorders such as epilepsy and autism spectrum disorders.

“We all love green lights when we’re driving  because they allow us to move forward, but if all the lights were green all the time, the results  would be catastrophic car accidents,” Soderling says. “The red lights are absolutely essential. It’s  the same in the brain: the inhibitory synapses are as necessary for proper neural function as the excitatory ones. Without them it is equally  catastrophic for the brain.”

But very little is known about the molecular  makeup of inhibitory synapses. Scientists have  extensively studied the excitatory synapses, describing their basic molecular structure and  identifying some 1,000 proteins involved in their various functions. Inhibitory synapses, by contrast, are much harder to get at; they’re  much more difficult to purify and examine biochemically, and until now only a few dozen of their component proteins had ever been identified. Relative to what we know about  excitatory synapses, the inhibitory ones are the dark side of the moon.

“We’ve known they exist for more than half  a century, and we know they are fundamentally  important, but we know very little about what they’re made of and how they work,”  says Soderling. “It’s an unexplored landscape in the brain.”

“A Little Bit of a Crazy Idea”

Soderling set out to map that  uncharted territory. His first few  attempts, he says, “failed miserably.”  Then he and postdoctoral researcher Akiyoshi Uezu, MD,  PhD, came up with an innovative idea.

Biotin is a naturally occurring  molecule, also called Vitamin H. It’s commonly sold in drug stores  as a dietary supplement reputed to strengthen hair and nails, but for  Soderling’s purposes, it also has some more useful characteristics. When activated with a bacterial  protein called BirA, biotin can be induced to “tag,” or attach to, any additional nearby proteins. Further, it happens that another  particular protein, called streptavidin, has an extraordinarily high affinity for binding to biotin on proteins.

Soderling and Uezu thought perhaps they  could, in essence, deliver what Soderling calls  “a molecular probe.” They would fuse the bacterial BirA protein with a mouse protein  known to localize at inhibitory synapses and insert it back into the mouse brain. In theory,  after giving the mice biotin supplements, this chimeric protein would tag all the unknown proteins in the vicinity with biotin. Then the  researchers could take that brain tissue and pass it over some streptavidin, which should, like a magnet or a strip of tape, pull out all the  biotin—and along with it all those proteins it had tagged.

“It was a little bit of a crazy idea,” Soderling  says. “If it worked, it would mean we could identify a lot of component proteins in the brain  without having to do all this very complicated biochemical analysis: we could just purify them using biotin. But we had no idea whether it  would work.”

Soderling and Uezu dubbed their new  procedure in vivo BioID. They ran the study  and sent the data off to have it analyzed by mass spectrometry.

“When the results came back, Akiyoshi came  in with the computer printout showing this list  of proteins,” says Soderling. “I looked at it, and I almost fell out of my chair. I was so excited I could hardly breathe.”

The printout included all of the few dozen  proteins already known to be present at inhibitory  synapses. But the list went on to show additional proteins—a lot of them. Using the in  vivo BioID method, Soderling and Uezu identified some 140 proteins that had never before  been known to exist at inhibitory synapse sites.

“It’s as if these proteins had  been locked away in a safe for 50 years, and we believe that  our study has cracked open the safe,” says Soderling. “And there  are a lot of gems in there.”

The newly discovered presence  of these proteins at inhibitory  synaptic sites leads to a tantalizing hypothesis:  that these proteins are necessary for the inhibitory  mechanism to work properly, and that in some cases mutations in the genes encoding  those proteins disrupt that functioning. And then you have a traffic grid with no red lights.

“When you lose that inhibitory mechanism,  the excitatory input goes unopposed, and that  leads to over-excitation in the brain: epilepsy,”  says Soderling. “And many children with autism spectrum disorders also have seizures, and it’s long been thought that an imbalance between the excitatory and  inhibitory mechanisms may be an underlying cause there too. So this may help explain that too.”

If the newly revealed proteins are indeed  complicit in causing these disorders, then those proteins may offer new targets for  therapies. Soderling and his lab are now engaged in follow-up research to try to determine exactly what role the recently  revealed inhibitory proteins play in these diseases.

“We think this is going to lead to new  insights into the etiology of these types of  disorders,” Soderling says. “So we’re very excited about where that might lead.” 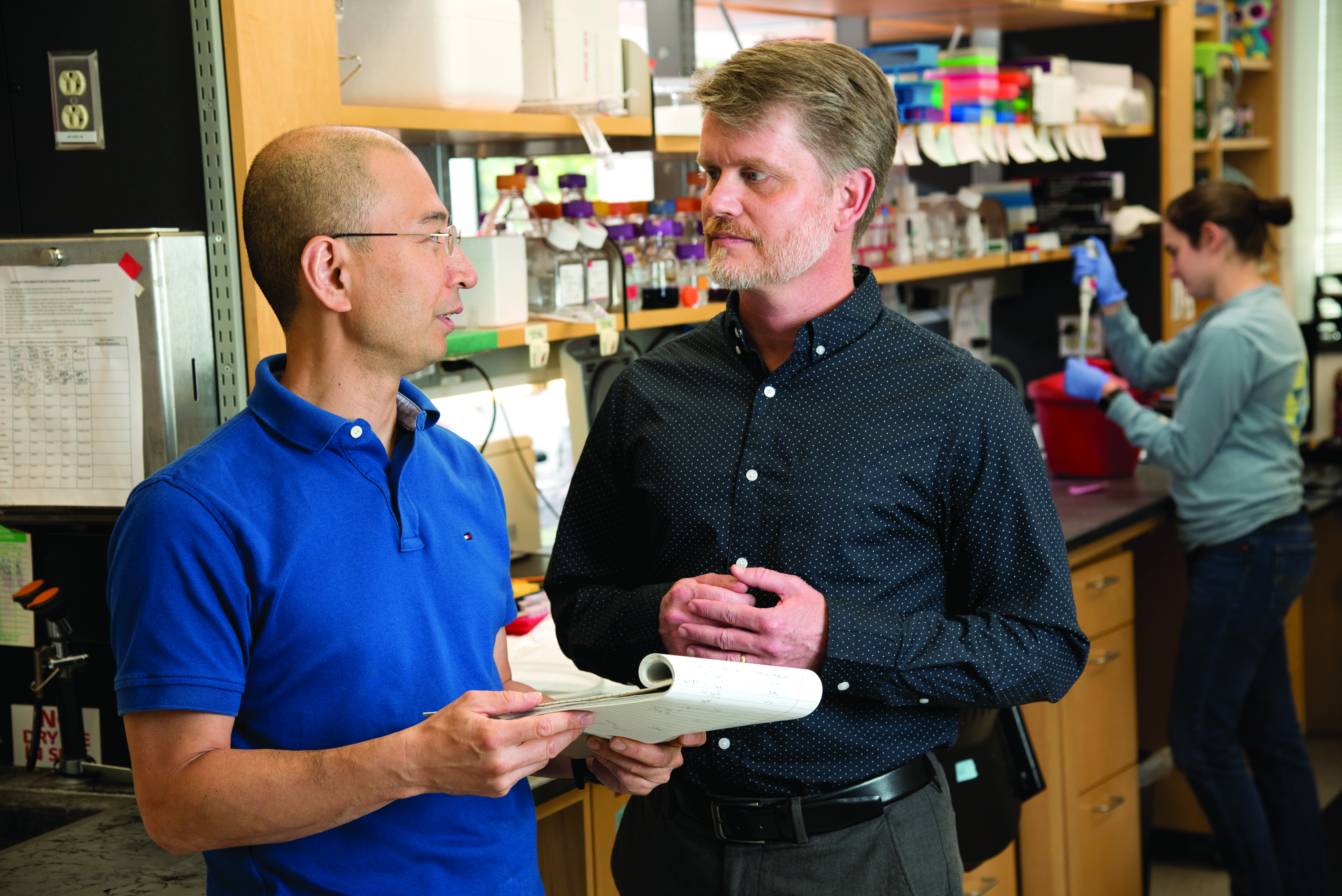 Beyond the immediate work of further  exploring the newly discovered inhibitory  synaptic proteins, Soderling and his lab are beginning to apply the in vivo BioID  technique to other little-known parts of the brain. And there are many of those.

“This was a good example of a fundamental  part of the brain that we’ve known existed for half a century but that we  didn’t have a good working parts list for,” Soderling says. “And it turns out there are  a lot more of those. There’s a huge landscape within the brain that, at a molecular level, we have a very poor grasp of. This  new technique opens up a huge potential for uncovering the molecular basis for how the brain works in many other regions.”

One of those involves the other kind of  synapses, the excitatory ones. In patients  with developmental brain disorders, the normal growth and development of  those synapses in the young, developing brain appears to be disrupted. A graduate  student in the Soderling lab, Erin Spence, has now used the in vivo BioID method to  identify a host of novel proteins that play a role in the development of those synapses:  when these proteins are knocked out in mouse neurons, development is dramatically disrupted.

“This is an example of how, using this new  molecular tool, we can go in and precisely pick  out the internal components of a variety of different brain structures,” Soderling says. “My guess is that as we identify these component proteins in different regions, we’re also going to identify genes implicated in many different disorders. Paired with the wealth of human genetic data, we can now start to explain  the underpinnings of these disorders. There’s so much potential here. We’ve only just scratched the surface.”

Soderling didn’t set out to be a neuroscientist.  He did his doctoral work in pharmacology at the University of Washington  and followed that up with research as a Howard Hughes Medical Institute postdoctoral investigator. In the course of  that research, he identified a novel protein in which mutations cause a rare and severe form of intellectual disabilities in children.

“That was my first ‘aha!’ moment,”  Soderling says. “That’s when it really  hit me that the molecular mechanisms we were studying have huge impact on human health.”

He came to Duke in late 2005. It was  the perfect environment for the kind of research he wanted to pursue.

“The research environment here is  special,” he says. “We have world-class  facilities and resources, but beyond that the  atmosphere is one that gives you the ability to grow in new directions, which is especially  important when you’re just starting out. My colleagues are fantastic. There’s a lot of collaboration, a lot of sharing of  ideas and approaches, and it was clear to me that Duke was one of those places that had that special combination of factors.”

The research he and Uezu did in uncovering  the inhibitory proteins garnered a lot of attention, and it has led to exciting  new avenues of inquiry. New therapeutic approaches surely remain a long way off—but by illuminating previously dark  corners of the brain, Soderling’s research helps light the way for those kinds of advances in the future.

“If your car is broken, you want to take  it to a mechanic who understands how cars work,” Soderling says. “It’s the same  with the brain. Unfortunately, we have a very poor understanding of how the brain works. If we can gain a better understanding of that, that will lead to better treatments. When it’s broken, we’ll understand exactly why it’s broken. And that is the first step to learning how to fix it.”

"When it’s broken, we’ll understand exactly why it’s broken. And that is the first step to learning how to fix it.”