A young woman comes to a clinic in San Antonio, Texas, after her boyfriend goes to prison. She wants to begin a new life outside of the gang world they were part of. Before he went to prison, her boyfriend left reminders to ensure she would not forget him: his name tattooed on her breasts. She asks the doctor to help her start a new phase in life by removing the tattoos, but she can’t afford laser removal.

Tolbert Wilkinson, MD’62, HS’64, a plastic surgeon, treated that young woman and thousands like her—people from all walks of life looking to erase their past and begin anew.

In 1997, the tiny police department in Bandera, Texas, asked him to help with the X-Tattoo Program, a tattoo-removal program designed to help former gang members leave their old lives behind and become productive members of society.

Wilkinson, who was assigned to develop an inexpensive tattoo-removal system by a national plastic surgery organization, agreed. He donated his time and expertise, and with other volunteers treated up to 80 people per morning. When demand outgrew clinic space, Wilkinson began treating people at his ranch in Bandera. “Initially, we treated people who wanted to get out of gang life and have a better chance,” says Wilkinson. ”Others did not have a chance to find a job with visible tattoos on their faces, necks, and arms. It was gratifying to see workers, housewives, and others who could not afford the cost of laser removal get on with their lives.” 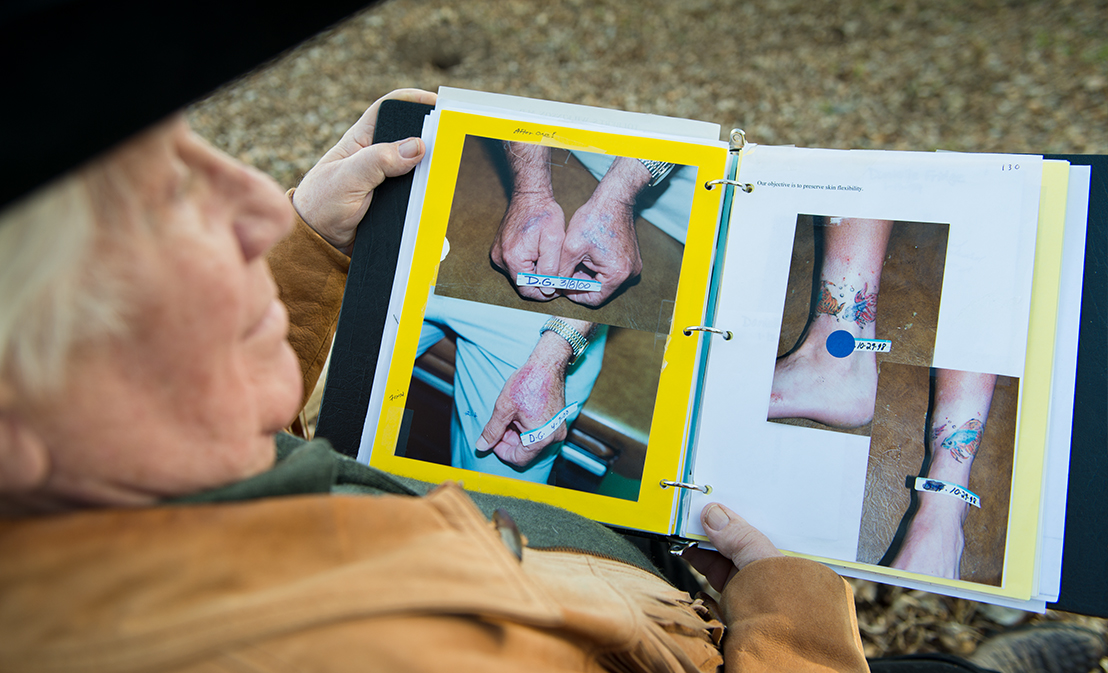 Wilkinson developed a simple tattoo removal system that made treating a high volume of patients possible. The TOBIL (Tattoo Obliteration by Intense Light) system uses a small portable device that creates an intense beam of white light that shatters all tattoo colors. This technique, he says, is effective, faster, and inexpensive compared to laser treatment. “Laser treatment can take 10 or more treatments to remove one tattoo, and it costs thousands of dollars,” he says. “With our system, it takes two to three visits to get rid of the tattoo at less than a tenth of the cost of laser.” Wilkinson says the TOBIL system is affordable for nonprofit and rehabilitation groups.

Over time, the X-Tattoo program expanded beyond its original population and Texas. Young people came to him who had been turned away from the military because they had visible tattoos. “It made me feel good to see them coming back to visit in their Marine uniforms,” he says. Others were people who, for various reasons, came to regret their tattoos.

Wilkinson volunteered for the program for over two decades. He provided training for similar initiatives in 23 states in the U.S. and eight countries in Central and South America.

As a child, Wilkinson dreamed of teaching literature, but growing up in a family of physicians steered him toward medicine. His father was a family practitioner in Wake Forest and served on Duke University Medical Center’s Advisory Board, and his two uncles were physicians. So were his two older brothers—Charles, MD’56, HS’58, and Harold, MD’59, PhD’62, HS’62, —and he followed them into Duke University School of Medicine.

Alongside his successful medical career, Wilkinson fostered a professional-level career playing polo for 25 years. He coached and competed in pentathlon and polo tournaments and became friends and playing partners with the actor Tommy Lee Jones, a longtime championship polo player.

In 1981, Wilkinson and his wife, Suzanne, served as delegation chiefs of the International Women and Junior Men’s Pentathlon in London and he was the vice president of the U.S. Olympic Modern Pentathlon teams. Wilkinson was also named royal physician for Princess Anne of the British Royal Family. Wilkinson, in cowboy hat, was in charge of Princess Anne’s health while she attended shooting matches in Dartford, outside of London, and later was invited to the Queen’s Royal Box. “There must always be an attending physician whenever members of the royal family are present,” says Wilkinson.

In 2014, after he had both knees replaced, Wilkinson retired to his ranch. He hopes that civic organizations will take the reins and sponsor affordable tattoo-removal programs in their communities. “You don’t have to be a doctor for that, and you can do it anywhere, not only in clinics,” he says. “We can train them and help them start up a program.”

“Initially, we treated people who wanted to get out of gang life and have a better chance.” Tolbert Wilkinson