The United States has one of the highest rates of preterm birth—up to 10 percent of all pregnancies—in the world. And many pregnancy complications, such as pre-eclampsia, which contributes to preterm birth, are associated with abnormal placental development.

“One of the reasons we don’t understand pregnancy well is that we don’t understand the human placenta, which is extremely complex,” says Liping Feng, MD, assistant professor of obstetrics and gynecology, who studies pregnancy complications and improving pregnancy outcomes. “The placenta is one of the most under-studied organs because we lack a model for research.”

Nutrients, oxygen, immunoglobulins, and waste all pass through the placenta.

Researchers have been stymied by the absence of an effective placental research model. Attempts to develop an in vitro model of the placenta that mimics its unique cellular properties have been unsuccessful, and ethical considerations prevent researchers from using the placenta in vivo. And because it’s a dynamic organ, developing throughout gestation, placentas collected after birth can’t be used to model placental dynamics. 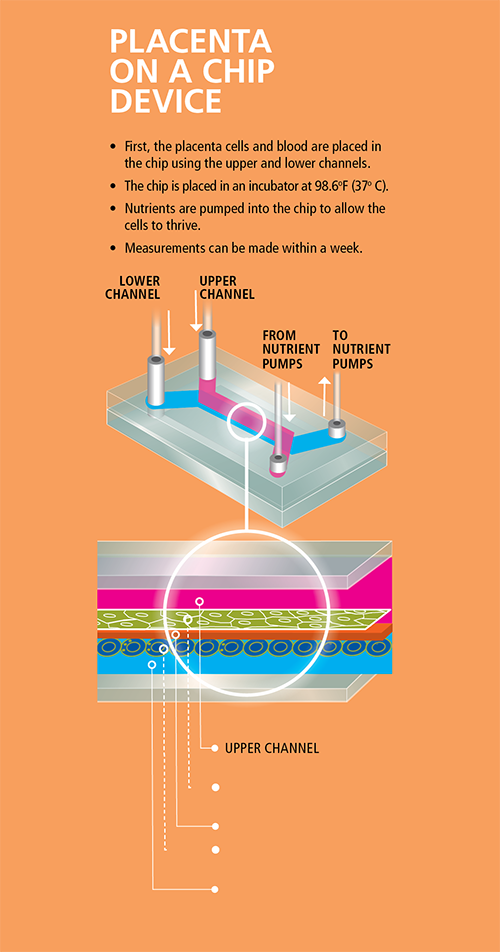 To address this challenge, Feng aimed to create a novel placenta model that would enable researchers to better understand the organ, the cellular interface, and the transport of nutrients and foreign components from the mother to the fetus.  Sallie Permar, MD, PhD, professor of Pediatrics, was also interested in the idea for her research in the transfer of both protective maternal antibodies and harmful pathogens to the fetus.

Permar’s team researches maternal and infant immune systems and strategies to prevent the transmission of viral and environmental pathogens between mother and child.

Feng approached George Truskey, MD, PhD, the R. Eugene and Susie E. Goodson Professor of Biomedical Engineering, because of his expertise in microfluidics—the manipulation of small amounts of fluid—and his pioneering research in engineering model tissues and blood vessels.

Truskey’s lab has developed a polycarbonate membrane that is seeded with placental cells drawn from patients who have had a C-section and given consent for a research donation of the placenta.  A channel above and below the membrane allows the researchers to draw fluid across at a very low rate, mimicking blood flow through an active placenta. Ultimately, they wish to dissect the route that molecules and virus particles take as they travel between mother and fetus.

A placenta model would serve multiple purposes. Researchers could study both normal function and disease states; better understand the mechanism of viral transmissions, such as Zika, cytomegalovirus (CMV), and HIV; study the immune regulation and nutrient transfer; and environmental toxicology.  “A system such as this “microfluidic placenta on a chip” is critical for researchers to understand how to optimally protect and nurture a developing fetus, and the design of strategies to avoid some of the perils of pregnancy, including congenital infections, adverse exposures, and preterm birth," says Permar.