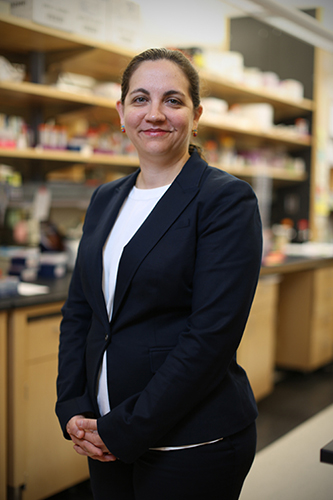 The computer screen in Cagla Eroglu, PhD’s, lab is teeming with activity. A computer mouse moves freely around a large, crimson blotch (an image of a mouse brain cell) in the center of the screen as numbers and graphs are updated on the left side of the screen.

The thing is, no one is sitting at the computer. But this is no ghost in the machine.

“Right now, somebody is connected to this computer and working remotely on computational image analysis,” says Eroglu, associate professor of both cell biology and neurobiology, whose lab is in the Nanaline Duke Research Building.

Welcome to the new normal – for now ­– across Duke’s medical research campus. Remote connectivity, reduced staff working on staggered schedules, mandatory masking, and social distancing are the new protocols while the campus continues to live in a COVID-19 world.

When Duke University went into partial lockdown in March, only a few, select labs that are working on a COVID-19 vaccine and treatment were allowed to remain open. The majority of labs were shuttered for safety reasons, sending thousands of lab workers home, and forcing investigators to scrap or pause aspects of their research.

In May, a phased-in process of reopening labs began, and by June 15 most labs were functioning at least on a partial basis.

For Duke University School of Medicine researchers like Eroglu; David Kirsch, MD, PhD; and Amanda MacLeod, MD, temporarily closing their labs was nothing short of titanic.

“We needed to come up with a plan to close our lab within 48 hours. There was a lot to do,” said Kirsch, the Barbara Levine University Professor in the Departments of Radiation Oncology and Pharmacology & Cancer Biology. His team works with mice to study how cancer develops and spreads, with the hope of finding a cure or developing new treatments to fight cancer.

“It was pretty intense,” Eroglu said of the rapid-fire shutdown. “We needed to find a way to shut down in a manner that would not completely undermine our ongoing experiments and future plans.”

Eroglu’s research aims to unlock the secrets of brain connectivity and what happens when pathways are broken. She hopes these insights will lead to treatments or cures for Alzheimer’s, Parkinson’s autism, and other brain disorders.

The research focus of MacLeod, an associate professor of dermatology, is understanding the immune system of skin. She is studying its regulation of defense factors that protect against microbial pathogens – including viruses – and how that defense ability varies with a person’s age. She also has shifted some of her focus to COVID-19.

A major first step in beginning the shutdown for all three researchers was determining which projects were critical and which could be restarted later.

“We had to make some really tough calls,” Eroglu said. “It was very stressful.”

Kirsch said, “We have experiments that can last anywhere from six months to two years and some of those had to end. But fortunately, we were able to maintain our long-term experiments.”

Arranging the shutdown was fast and furious.

“I actually planned out the shutdown in hours, not days,” MacLeod said.

The researchers were able to freeze some samples so they could continue working on them once their labs reopened, and members of the Duke Animal Laboratory Research team tended to the researchers’ mouse colonies several times a week.

Progress Made During Shutdown 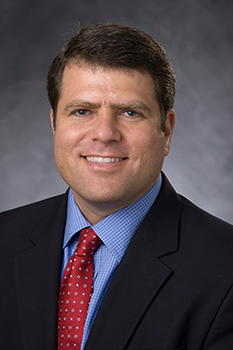 There was little rest for the researchers and their teams during the shutdown, even though they had to dramatically alter their way of working.

“My team had run a lot of the wet lab experiments (prior to the shutdown), so all of the analysis had to be done, which could be done remotely and easily,” MacLeod said. “Downtime was actually very busy.”

Same for Kirsch and Eroglu, and when Eroglu’s data ran out, she charged her team with looking at existing literature for data that they hadn’t had time to analyze. “So, we used (that data) to ask specific questions that we had.”

Some of Eroglu’s team members took online courses to enhance their computational bioinformatics methods, and the team participated in virtual seminars.

“It was a different way to doing science,” she said, “but I think we were able to utilize it to the best of our abilities as effectively as possibly.”

“And we had a lot of one-on-one Zoom meetings so we could discuss their projects and plans for when the lab reopened.”

Back in Business, Of Sorts

Strict rules were put in place as labs began partially reopening in mid-May. Staffing was reduced and stringent work hours were established so there is no overlap of people; each day staff members’ temperatures are taken and a symptoms survey completed; masks are worn at all times; and social distancing is taken so seriously that sometimes it seems investigators and their charges are shouting at each other while having a discussion across lab bays. 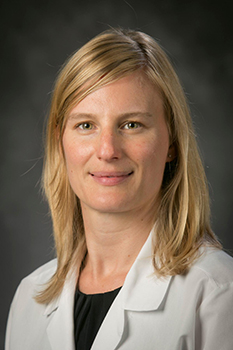 MacLeod’s first tool-of-choice when notified she could begin the reopening process was a tape measure.

“I went in and measured safe distancing,” she said. “I wanted to make sure that everyone feels really comfortable with the decision (to reopen.)” Red tape Xs mark the floors about eight feet apart in each bay of MacLeod’s MSRB-III laboratory space, indicating where people should stand to communicate or pass.

Protocols for use of microscope rooms, tissue sampling rooms, and even bathrooms, kitchen areas, and breakrooms needed to be established. “I discussed a lot with my team and we tried to virtually play through a day and how it would work,” MacLeod said.

Eroglu said she “was very excited to be able to come back. But it was a very intense period for us to understand how we will do research because it is quite different than what we’re used to.”

She walked into a lab bay where, once, four researchers sat the benches, and pointed out that now, only two are allowed to work at opposite ends of the bay.

“And we only are using two bays in this lab. There are three, but we skip the middle bay,” she said.

For now, principle investigators are not allowed to stand near a colleague or look over their shoulder at a computer screen or petri dish. These once organic discussions have switched to cyber conversations over ZOOM.

“We cannot show each other procedures,” Eroglu said. “We can’t sit next to each other and do experiments together. I think we are missing a lot by being far away from each other.”

“The hardest part is that our lab is a very social place where students and other trainees learn from each other. They help each other,” Kirsch said. “By maintaining social distancing, we lose some of that.”

But despite the challenges of today’s lab reality in a COVID world, the researchers said their work has not been compromised.

“I think that the science definitely slowed down, but we’re able to make forward progress now,” Kirsch said. “I’m confident that in the long run we’ll be able to reach our goals.”

“Being able to come back to the lab and continue our work is giving us a lot of hope,” Eroglu said.

It was a very intense period for us to understand how we will do research because it is quite different than what we’re used to. Being able to come back to the lab and continue our work is giving us a lot of hope.