No one knows better than Willard “Bud” Budzinski about the need for student aid in the Duke University School of Nursing. In 1994, retired after almost 30 years in the United States Air Force, Budzinski, who had earned an MBA while in the service, began work as a business manager and assistant dean for business and finance at the School. Part of his job was developing rules for funding scholarships. “I became very familiar with the need for scholarships, which was tremendous, and the lack of money to pay for them,” he says. At that time, scholarship endowments for the School of Nursing were small — most less than $100,000. 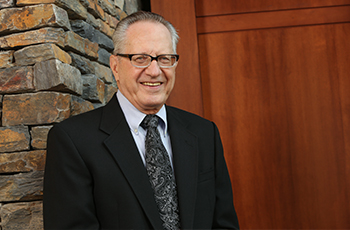 During the time that Budzinski was working full time at Duke, then-dean Mary Champagne, PhD, RN, FAAN, started the Accelerated Bachelor of Science in Nursing (ABSN) Program, among other new initiatives. “It was a very busy and exciting time to work at the School of Nursing,” Budzinski says. Over the years, he saw the student body triple, from about 100 students to nearly 300. And the need for financial aid grew right along with it. “As the student body grew larger, we could fund only those with greater need, and we had to add in more loans to supplement the scholarships,” Budzinski says.

In 2013, ten years after Budzinski had retired from full-time work at Duke, his wife, Maureen, began treatment for cancer at Duke. “Maureen thought the nurses were simply fantastic. They were compassionate and caring,” he says. “It was Maureen’s idea to say, ‘Let’s try to give something back.’”

Sadly, Maureen lost her battle with cancer in 2015. The couple was married for 52 years. They met in Britain while Bud was in the Air Force and Maureen was serving in the Royal Air Force. They were set up on a blind date by mutual friends to play bingo. “Maureen always joked that she had won the jackpot: me,” Bud says. “She was the love of my life.”

Because of the quality nursing care that Maureen received and, of course, the need for student aid that had remained in Budzinski’s thoughts, he took action. With matching funds from Duke University’s Access and Opportunity Fund, Budzinski is endowing a scholarship for ABSN students with a pledge funded by annual qualified charitable distributions from his Individual Retirement Account (IRA) under the provision of the Protecting Americans from Tax Hikes Act of 2015 (a charitable IRA rollover). In addition, to help nursing graduate students with a major or specialty in oncology, gerontology or adult care, a bequest of his entire IRA upon Budzinski’s passing will endow the Willard C. and Maureen Anne Budzinski Scholarship Fund.

We at DUSON honor Maureen’s memory and the ongoing generosity of the Budzinski family.