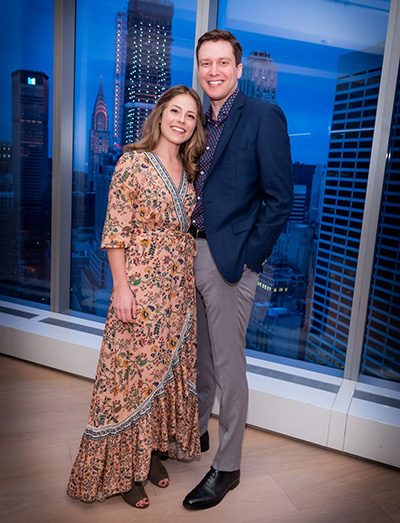 Those who knew and loved Owen Strong describe him as tall, lanky, handsome, smart, happy, funny, and nice: in sum, befitting his 2018 Halloween costume as The BFG (Big Friendly Giant), said his girlfriend, Stacia Smart. And Owen loved in big, giant ways, too, focusing less on his own needs and more on those of his family and friends. It was out of love that he protected them, as much as he could, after he was diagnosed with the worst kind of brain tumor in 2018.

The New York City native was 28 years old when he was diagnosed with glioblastoma multiforme (GBM). His neurosurgeon at Memorial Sloan Kettering was truthful, telling Owen and family — parents Ed Strong and Laurel Durst and sister Leda Strong — that he would be lucky to have five more years. Two years was more likely. Laurel remembers him saying, “Well, two years is pretty good.”

When he met Stacia at a Halloween party some months later, they talked for hours, but not about his diagnosis, or how his treatment was making him sick. In fact, it would be about two months before Owen would tell Stacia about the GBM diagnosis at all, and when he did, her reaction was probably nothing he expected.

“The first question I asked was if he was part of the ‘polio trial,’” said Stacia. “He lit up and told me that he had just been accepted.”

The “polio trial” is the clinical study of poliovirus therapy for GBM at the Preston Robert Tisch Brain Tumor Center at Duke. The therapy uses a genetically modified form of the poliovirus vaccine, which is infused directly into the brain tumor via a surgically implanted catheter.  In 2018, the same year Owen was diagnosed, the New England Journal of Medicine published a Duke study that showed significantly improved long-term survival for patients with recurrent GBM, with a three-year survival rate of 21 percent, compared to 4 percent in the control group.

Surgery and adjuvant therapy at Memorial Sloan Kettering had banished the cancer from Owen’s brain, but in December 2018, the tumor reappeared. In January 2019, he began poliovirus therapy at Duke.

Laurel remembers being surprised, in the best way, by Duke neuro-oncologist Henry Friedman, MD’s communication style. “I don’t know how he does it, but he responds to calls immediately,” she said of Friedman, the James B. Powell Jr. Professor of Neuro-oncology in the School of Medicine. “Everyone is on top of what’s going on. I thought that was super important.”

Things looked up for Owen for a while, and Laurel was grateful that he wasn’t on chemotherapy. She and Ed moved him into a small apartment in their building so they would be close by when he needed them, and his friends stayed by his side. He continued to crack jokes and proclaimed his birthday, April 6, to be International Owen Day. 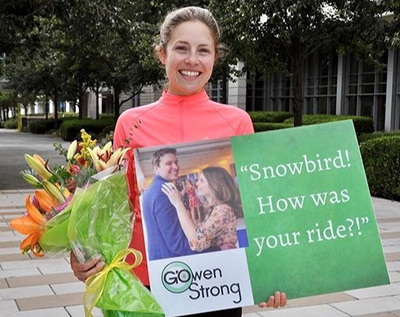 In need of a goal

In her grief, Stacia knew she needed to do something. Since meeting Owen, she had gotten back into an earlier pastime, cycling, and she decided that her goal would be to ride her bike down the East Coast to raise funds for brain tumor research. She began to train under a world-class cyclist, Noah Middlestaedt, riding six days a week.

Stacia’s personal goal turned into a family goal. Her parents, Stephanie and Gerald Smart, organized the details of the trip, carefully plotting the route along the East Coast Greenway, from Boston, Massachusetts, to Durham, North Carolina — more than 1,000 miles. Stephanie made sure Stacia ate well while training. Laurel would occasionally train with her on a stationary bike. Her brother Brandon and Leda helped to launch a website and social media presence to raise awareness about the project. Stacia dubbed the fundraiser “G’Owen Strong.”

Stacia began the ride on September 11, 2021, with her parents and Owen’s parents following along by car to protect her from traffic. She rode between 50 and 70 miles a day. Stephanie kept the entourage healthily fed, and the group had dinner together in the evenings. Leda organized a party when the group made it to New York. Laurel and Stephanie brought electric bikes on the trip, and when the conditions were friendly, they would ride with her. On October 8, 2021, she pedaled up to the front entrance of the Duke Cancer Center, greeted by a cheering crowd. 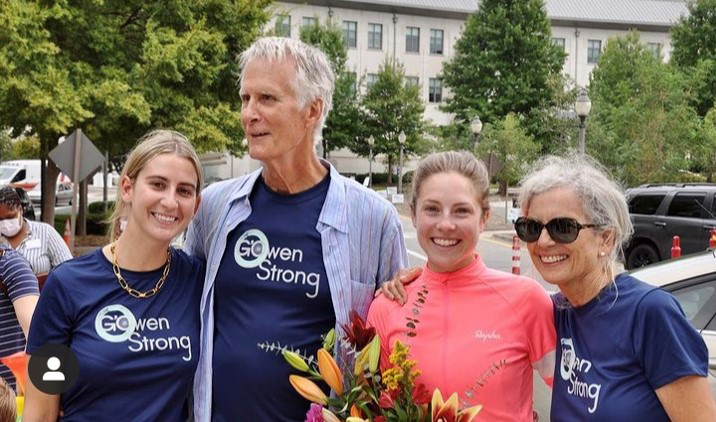 The project touched a chord. Bolstered by a generous gift from Ed and Laurel, G’Owen Strong has raised $1.2 million to date for glioblastoma research.

“The dream is to come up with a cure,” said Laurel. “People are striving every single day to figure out how to approach this, and I hope they find a cure or extend people’s lives with as little discomfort as possible. It thrills me to support the people who are innovators and soothers and helpers who work so hard.”

Stacia hopes Owen’s story inspires people to help any way they can.

Carol Harbers is the director of communications and marketing for the Duke University Department of Neurosurgery.