A One-Dollar Bill Leads to Almost $20,000 for Pancreatic Cancer Research 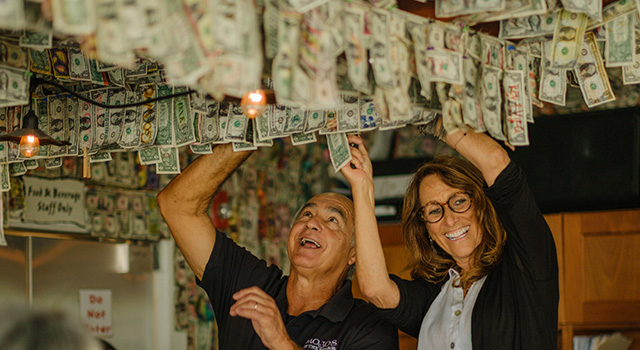 A one-dollar bill started it all. In 2011, John and Andrea Pitera had just opened Mojo’s on the Harbor. Brooke Williams, their very first customer, paid in cash and signed their first dollar for good luck. He had no idea that he was starting a trend that would lead to thousands of dollars for cancer research.

John and Andrea Pitera, the previous owners of Mojo’s on the Harbor, a popular seafood restaurant on Bald Head Island, North Carolina, spent the last afternoon of their business taking down thousands of dollar bills, which decorated the walls of the restaurant for almost a decade.

“It was a wonderful afternoon,” says John Pitera, who sold the restaurant in October 2019. “We had 25 friends who came to the bar and helped us take the bills down, count them, put them in piles of hundreds to be ready for the bank, and clean up all the tacks and pins that were all over the place.”

The majority of the money was in one-dollar bills, but there were some hundred-dollar bills and fifty-dollar bills. The bills added up to $19,461. Pitera did not plan to cash in the dollar bills. He and his wife, Andrea, decided to donate them to the Duke University School of Medicine to support pancreatic cancer research in honor of their good friend, Brooke Williams of Bald Head Island, who died from the disease in 2012.

“Duke did such a good job in keeping Brooke alive,” says Pitera. “Usually, at stage four pancreatic cancer you've got 60 days, if you're lucky, and Brooke lived more than a year. We think it was because of the great treatment that he got at Duke.”

The Piteras’ gift will support the research of Peter J. Allen, MD, FACS, chief of surgical oncology for the Duke Department of Surgery and chief of surgery for Duke Cancer Institute. Allen is working on developing novel strategies for early detection and prevention of pancreatic cancer and finding safer and less invasive ways to perform pancreatic surgery.

“This is a very special gift with a remarkable story that was initiated and created by Brooke, John, and Andrea, and then brought to fruition by thousands of others who wanted to be a part of what sounds like a true movement,” says Allen. “Brooke was diagnosed with metastatic pancreatic cancer, which is one of the main reasons that pancreatic cancer is so deadly. It is diagnosed after it has spread to other parts of the body. We will use this gift to further develop our program in early detection and prevention of pancreatic cancer. If we can diagnose this cancer at an earlier stage, then we believe patients will have far superior outcomes.”

It all started with a one-dollar bill in 2011, when the Piteras opened Mojo’s on the Harbor. Brooke Williams and his wife, Nonie, were the first customers of the local restaurant. They took seats at the bar at opening time on the first day of business, and when it was time to leave, Brooke paid his bill and signed the very first dollar the restaurant made for good luck. Andrea and John displayed the dollar bill on the wall, and that quickly became a trend. More customers asked to sign their bills and write good wishes on them, and the bills were tacked on the wall. Andrea added colorful markers and customers started decorating the bills and adding them to the collection.

A year later, Williams was diagnosed with a stage four pancreatic cancer. John and Andrea dedicated the wall to their friend and named it “Brooke’s Wall." Williams passed away that year. “Brooke was a storyteller,” says John Pitera. “When you had a conversation with him, he would weave a story into it, and it was usually something very comical. He would always be very entertaining.”

Over the years, Brooke’s Wall expanded, and dollar bills covered the walls of the bar and the restaurant. Each dollar told a story. “People would put their birthdays on it, when they got engaged, married, or got pregnant,” says John Pitera. Some dollar bills told the stories of people who struggled with cancer or lost their loved ones to the disease. “Some people would come back afterwards and say, ‘I was here eight months ago, and I had cancer and now I'm cancer free,’” he says.

John and Andrea Pitera have decided to retire, and they plan to travel the world. “This gift made us feel really good,” says John Pitera. “If we can help even one person, that would be wonderful.”