A Good Way to Give 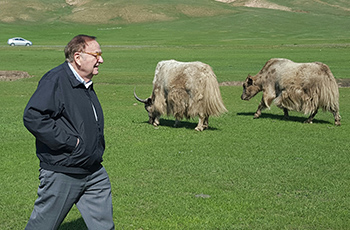 T. Rudolph “Rudy” Howell, MD’58, vividly remembers his first day at Duke University School of Medicine. Howell had been accepted after applying “on a dare, almost” from some of his classmates at Wake Forest University, and he recalls Wilburt C. Davison, MD, the legendary founding dean of the school, welcoming the incoming class.

“He stood in front of us and said we had been selected from among the most select group of applicants,” says Howell. “He said, ‘From this day forward you will be called ‘Doctor,’ and you will be expected to act like one.’”

Howell certainly complied. After earning his medical degree at Duke, he joined the United States Air Force, where he served as a cardiopulmonary specialist, flight surgeon, hospital commander, and chief of Aviation Medicine for almost three decades. He recorded thousands of hours of flying time and was stationed at bases throughout Asia and the U.S.

After his long career in the military, Howell returned to civilian duty as a pediatric radiologist and chair of the Department of Pediatric Radiology at the Medical College of Virginia (now Virginia Commonwealth University School of Medicine) and at Children’s Hospital in Richmond, Virginia. He retired in 2008. He has been a member of the Southern Medical Association since 1965 and served as its president in 2003-2004.

“Medical school at Duke prepared me completely for the rest of my medical career,” says Howell. “My experience there was very positive, and I have a deep appreciation for the university and the School of Medicine.”

He and his wife, Cheryl, have expressed that appreciation in numerous ways. Howell has been active in the Davison Club and served as its president from 2000 to 2002. He and Cheryl established Dr. T. Rudolph and Cheryl Howell Scholarship to support fourth-year medical students with an interest in radiology.

They give back through a Duke program that allows them to dedicate their required annual withdrawals from their Individual Retirement Accounts directly to the Duke fund of their choice.

“A lot of people may not realize that after age 70½, you have to take a mandatory withdrawal out of your IRA every year,” Howell says. “This arrangement lets us meet that requirement and at the same time contribute to Duke. For us, and probably for a lot of other people, it’s a very good way to give.”