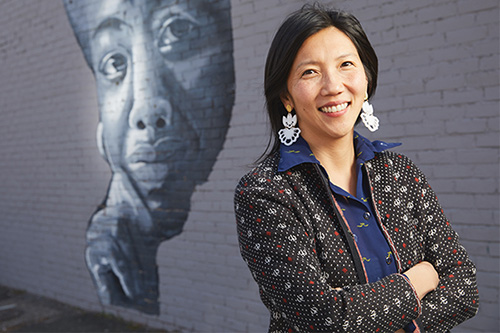 Emily Wang, MD’03, spent her first two years at Duke University School of Medicine planning to specialize in HIV treatment and research. But during her third year, she couldn’t stop thinking about conversations she had had with a friend who had worked in prison education while an undergraduate at Harvard. The stories he told her made glaringly clear the racial disparities in rates of incarceration and the death penalty.

She started writing to prisons asking to volunteer. A warden at a women’s prison in Raleigh, North Carolina, responded, and one day soon afterward she found herself, for the first time in her life, stepping inside a prison.

The experience changed her forever. Wang now directs the SEICHE Center for Health and Justice, a collaboration between the Yale School of Medicine and Yale Law School that encompasses clinical care, research, policy work, and education to address the health impacts of mass incarceration.

She points out some startling facts. Half of all individuals in the United States have at least one immediate family member who is incarcerated. Living in a community with high rates of incarceration is associated with lower life expectancy, at a population level.

“Policies that constitute mass incarceration — from over-policing, and stop-and-frisk, all the way to the death penalty — have impacted our overall population health,” says Wang, a professor in the Yale School of Medicine. “And COVID probably is the best examination of that.”

In 2020, Wang co-chaired a committee of the National Academy of Sciences that published a consensus report, Decarcerating Correctional Facilities during COVID-19: Advancing Health, Equity, and Safety. It details how decarceration – releases and changes to arrest policies – can reduce the transmission of COVID-19 inside prisons and jails and protect public safety and health.

Following Centers for Disease Control guidelines for reducing the spread of COVID-19 inside prisons is nearly impossible, Wang says. People sleep two to a cell. Overcrowding is common. Many prisons don’t have enough masks.

Wang and colleagues at the SEICHE center used data from a large urban jail to evaluate other strategies: decreasing the jail population with releases and reduced arrests, having people sleep in single cells, and conducting asymptomatic testing.

At the beginning of the study, the reproduction rate of the virus was 8: every person infected with COVID-19 would, on average, infect 8 others. After 83 days with the new measures, the rate was down to 1.

At the heart of the SEICHE center are clinical care and other programs provided by the Transitions Clinic Network, which provides a primary care home for people recently released from prison in 14 states. Wang and a colleague started the first Transitions Clinic Program in San Francisco because, as an intern, she saw people just released from prison ending up in the emergency department for no good reason.

“Just released from a correctional facility, was on dialysis for three years, but no dialysis appointment,” Wang says. “Or a person comes home, they have their insulin, but they have never administered it. They don’t know how. There was always a correctional officer that took them to the window, the nurse checked the glucose.”

“I thought, this is fixable. And the onus is on physicians to make this transition go better,” she says.

In the Transitions Clinic Network, a person who was previously incarcerated works alongside each primary care team as a community health worker. “They are attending to the social and health care needs of the patient, but also rebuilding trust in a health care system that has all but abandoned them, inside prison and outside,” Wang says.

Wang’s path changed course the day she first set foot inside that prison in Raleigh. She and some of her medical student friends soon began an educational program for new prisoners designed to spark discussion about the decisions young women have to make to be well and stay safe.

Wang remembers that the whole group ended each session in tears. “I saw young women just like myself that, because of the structures, the policies, the ways that our communities are deeply segregated, had had a life course that was totally different from mine,” she says. Seemingly small decisions, like dating the wrong guy, or circumstances out of their control, like not being able to afford bail, had landed them in jail.

The pace of medical school, Wang says, can feel like a treadmill you can’t get off. But Duke allowed her to “create a little space” for her ideas, and it gave her a group of inspiring friends. “By bringing together the right people, something happened that was deeply special to me.”