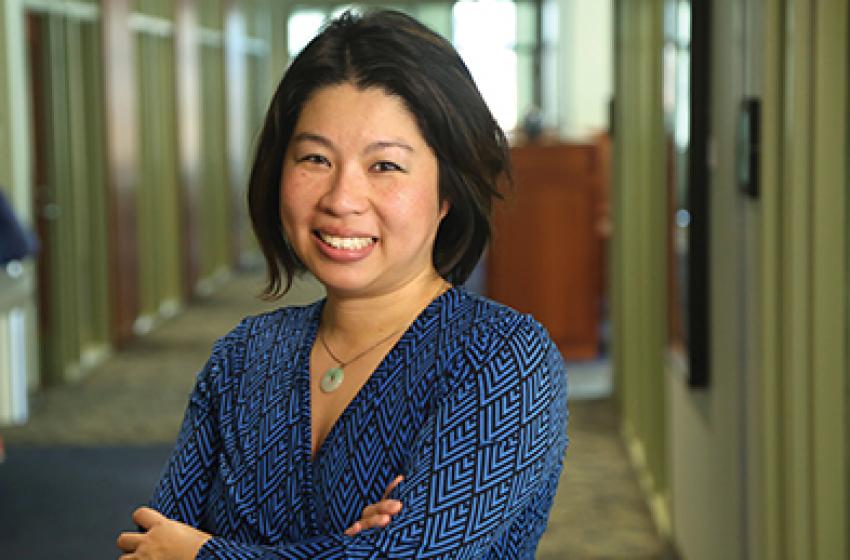 Liane Lau spent several years working in publishing in New York and Philadelphia and was quite successful at it. However, deep down she knew she wanted to do something more meaningful.

She decided to take a break to figure out her next move. Over the next year and a half, Lau—who has traveled to more than 50 countries—biked across the U.S. twice and climbed mountains for charity. She also backpacked through Southeast Asia and competed in an Ironman race. At the end of her travels, her heart finally landed in one place: nursing.

“I thought about my goals and priorities of being independent, working in any country, and having skills that are meaningful,” Lau says. “I chose nursing for the flexibility in traveling and working, as well as because it is a lifelong career, one where I can continually grow and never reach a glass ceiling.”

The choice to come to Duke for an ABSN degree was an easy one for Lau, despite having been offered free tuition at another school. “All things considered, Duke had so much more to give in terms of support and resources,” Lau says.

Since enrolling in the ABSN program in fall 2017, Lau hasn’t been disappointed. She says she has enjoyed learning from supportive faculty and joined a student-led program, the Duke Navigators Program. As a part of the program, she is paired with a Duke oncologist and has the chance to learn about end-of-life care.

Despite all of her travels, Lau has yet to make it to Africa, but the School of Nursing is giving her the chance to add an African nation to her list. ABSN students have the opportunity to participate in a global clinical immersion experience, and Lau will travel to Tanzania, where she and a group of Duke nursing students will give health assessments to orphaned children. She will also take an alternative spring break to a rural area of Guatemala to work with midwives.

Lau is considering working in an emergency department after graduation. But eventually, she hopes to find a way to combine her love of adventure with helping others. “I think it would be really fun if I could be a flight nurse, maybe in the mountains, for a search and rescue team. The sky’s the limit.”