With a Little Help 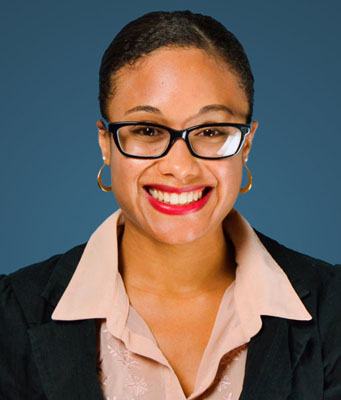 At a young age, Melanie Rogers was placed in a foster care home in Virginia. She was raised by a foster mother and a Peruvian nanny alongside 27 foster siblings throughout her childhood. Early on in her life, she recognized a common sentiment that they all share. ”Due to the trauma that we experienced prior to being put in a foster care, we deep down believed that we would not amount to anything greater than what our parents were,” says Rogers, a second-year student in the Duke Physician Assistant Program. “I spent my entire childhood and adulthood fighting that feeling.”

Rogers did not let that feeling take over. Inspired by her pediatrician, who has been a role model for her since an early age, she was determined to advance her dream of becoming a health care professional. Growing up with a Peruvian nanny who spoke no English certainly helped. While in high school, Rogers volunteered as a translator for Spanish speaking patients in her childhood pediatrician’s clinic and had the opportunity to shadow the pediatrician’s work.

Rogers volunteered in different clinics in the area, but her experience at a free clinic for uninsured patients in D.C., influenced her the most. “There was an elderly woman who spoke no English and she was scared,” says Rogers. “I stayed with her throughout the whole visit and started developing relations with her. That was the moment when I knew I want to go into medicine and work with uninsured Spanish speaking populations,” she says. While in college, Rogers travelled every summer with an international group of students to volunteer at a local clinic in the Dominican Republic.

Rogers appreciates the vital role that mentorship played in her life. Before she came to Duke, she mentored children in a foster care community and guided them on how to achieve their academic goals. She shared with them her experiences on how to apply to college and how to prepare for the standardized tests when you cannot afford expensive prep courses. “I remember a super excited ten-year-old girl who tapped me on the shoulder and said: ‘So you mean if I want to go into medicine, I can do that?’ and I told her, ‘Absolutely,’” says Rogers.

While at Duke, she received a scholarship from the University Scholars Program. Rogers was assigned to mentor an undergraduate minority student, who seeks to develop careers in health care. “I've learned that a girl that grows up with 27 foster siblings does not get to Duke on her own. She gets here through the help of many people. Duke made it possible for me to help students who need that little extra guidance to push their careers forward.”

I've learned that a girl that grows up with 27 foster siblings does not get to Duke on her own. She gets here through the help of many people.