Come One, Call All: The Joys of the Osler Literary Roundtable

Outside, it is a Friday afternoon in early March: cold, bright, windy.  Inside- in a small room on the first floor of the Duke Clinic – it is after dinner and Count Ilyick Rostov has downed another ryumka of vodka in the bar of Moscow’s Hotel Metropol.

“Do you think he’s going to get liver disease with all this drinking?” a woman asks.

For the twelve attendees of the Osler Literary Roundtable (OLR) reading Amor Towles’s novel A Gentleman in Moscow, the question is not entirely rhetorical.

Created more than 30 years ago as part of a broader arts and health initiative, the OLR is a weekly gathering of physicians, staff, and other interested attendees who are devoted to reading and discussing literature of all kinds, including poetry, memoirs, essays, and novels. The focus of the writing is sometimes, but far from exclusively, medical. For several years the group was facilitated by a local poet or author, but for many years now, inaugural member Francis A. Neelon, MD, HS’62-’64, P’88, associate professor emeritus of medicine, has been at the helm. 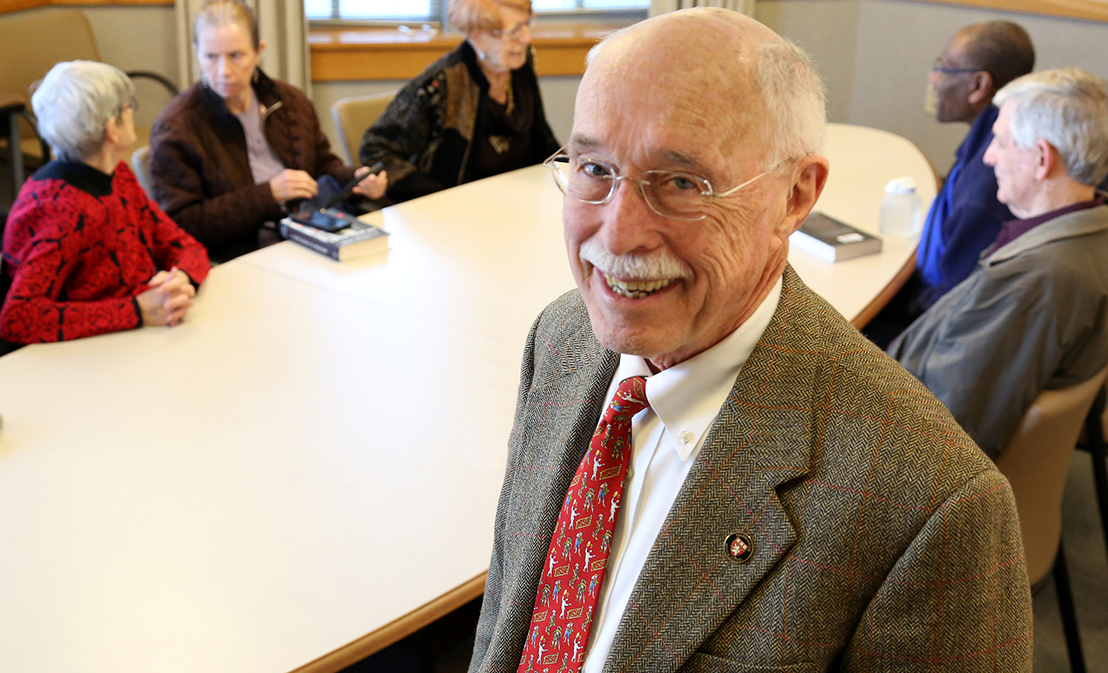 Educated at Harvard, Neelon was well-versed in the technical aspects of medicine. He was also given a slight book, The Care of the Patient, by Francis W. Peabody that he read but didn’t keep. It wasn’t until he was an intern at Duke that he returned to the book.

“I was amazed by how much smarter Peabody had become in four short years,” says Neelon with a laugh. “And since then, I have read it probably 50 times for various reasons. The book has had a profound influence on me.”

Neelon’s interest in literature inspired him to take a summer sabbatical—highly unorthodox for a practitioner—to delve into literature at St. John’s College in Santa Fe, New Mexico. “I learned to see with new eyes by seeing the many different ways in which my colleagues interpreted the words we read together,” says Neelon of his experience.

He admits that OLR reflects a personal bias about what he sees as the role of a physician.

“We need to listen carefully to a patient’s story, which is going to be told in a unique language, the patient’s language,” he says.  “It is not going to be linear, usually, so it won’t have a beginning, a middle, and an end. It will all be jumbled up. Part of the medical provider’s job is to hear that story and sort it out. It’s about hearing, understanding, and interpreting. That’s what we’re trying to do in our group.”

The group’s conversation is lively and varied, bouncing from historical references to modern celebrities. Reading aloud is part of the experience. Some follow along, their books open to the passage, scanning the page to be ready for when it is their turn to pick up the reading; others look away, lost in the simple pleasure of hearing literature.

The group provides a respite from what Neelon feels has become the “incredibly hurried, hectic, and breakneck” pace of practicing medicine.

As the hour comes to a close, the next week’s reading assignment is confirmed and, just as quickly as the group gathered, they depart, books tucked under their arms, talking about character development on the way out the door.

When asked about the group’s influence on his own practice as a physician, Neelon reflects for a moment. “One time we read a story by Tillie Olsen,” he says. “There’s a line where a character says something of the order of, ‘By god, I know what that song means.’ Shortly after that I was in the clinic with a patient who was sharing his story, and it became clear to me that what he was describing was congestive heart failure. When I recognized it, my first thought was, ‘By god, I know what that song means.’ Immersing yourself in literature is operating at that level. If successful, it broadens your vision of what counts, what’s important, what really makes a difference.”

The OLR welcomes new attendees and can be found in Room 1993, Duke Clinic South (across from Clinic 1C) every Friday at noon