Sniffing Out An Abrupt COVID-19 Symptom

An immunologist, neurobiologist, virologist, and medical doctor join forces to study one of COVID-19’s stranger mysteries: the sharp loss of smell and taste. 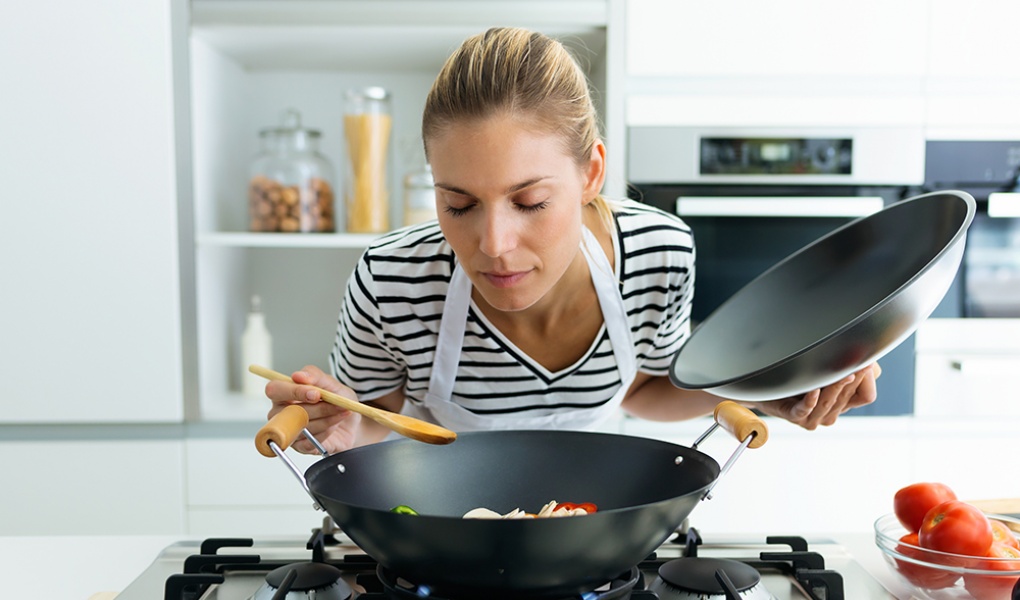 A buttery, rosemary-infused turkey cooks in the oven. Fresh cinnamon rolls drip with vanilla icing. Tart, sparkling cider fizzes in a glass. Every holiday season, most people can enjoy these treats thanks to an intricately wired central nervous system which controls the ability to smell and taste along with other senses.

But that is not the case for everyone. Even before the pandemic, Brad Goldstein, MD, PhD, associate professor at Duke in the Departments of Head and Neck Surgery and Communication Sciences and Neurobiology, treated patients regularly who suffer from an altered sense of smell or taste for one reason or another, whether it be sinusitis, traumatic head injury, or post-viral congestion. In fact, nearly twenty percent of people over age 40 experience varying ranges of smell and taste dysfunction.

“With COVID-19, the loss of smell and taste is very abrupt and often occurs even in the absence of other symptoms,” said Goldstein. “And in a lot of patients, it may last a few weeks or a month and then resolve but it’s become clear that in some people it doesn’t seem to go away or go away very quickly. We’re starting to see people three or five months out, who have pretty much recovered except that their sense of smell is still not working well.”

Earlier this year, Matsunami and Goldstein found that humans can produce new olfactory sensory neurons well into adulthood, which could offer hope for people who have lost their sense of smell due to cell damage. The nose is one of a limited number of places in the body – with another being the hippocampus in the brain — that is known to be capable of growing new neurons.

Having studied the cells that live in the nose for decades, Goldstein and Matsunami were easily able to apply that knowledge to study COVID-19. For example, early in the pandemic, scientists found that the coronavirus enters human cells through a protein receptor called ACE-2 which sits on the surface of many types of cells. The coronavirus uses the spiky protein on its own surface to fit into the ACE-2 protein—like a key into a lock—and is then able to invade and infect the cell.

When this news broke, Matsunami and Goldstein teamed up with a multi-institutional group of scientists at Duke to hunt for the ACE-2 receptor on cells in the nose. By analyzing mouse, non-human primate and human nose tissue samples, they found that the ACE-2 receptor is located on the support cells for olfactory sensory neurons. These support cells, called sustentacular cells, are the ‘nurses’ of the olfactory system, providing structural and metabolic support to the neurons.

Finding the ACE-2 receptor on the sustentacular cells was a lot like finding a bus stop on a street. The infrastructure leads one to assume that a bus might use the stop, but more research is needed to determine if this is indeed the case.

“The finding provided us with a good place to start looking,” said Matsunami. “The fact that the ACE-2 receptor is located in the support cells leads us to believe that this may where the virus enters the body, but we’ll need to confirm that in living cells.”

To test whether the support cells in the nose are indeed an entry point for SARS-CoV-2, the team will need to infect mice with the virus and observe the pathways the virus uses to invade.

If the virus is found to infect through these cells, that will be one key difference in SARS-CoV-2 and flu transmission. Earlier this year, Heaton and Moseman, who have long studied flu transmission, found that influenza B targets the olfactory sensory neurons rather than the support cells. Neurons become infected, then eliminate the virus and survive in the host after the infection has been resolved.

Why the two viruses may use different nasal cells to invade is a mystery but could be related to the different effects of the infections. Loss of smell associated with SARS-CoV-2 usually appears rapidly, within two days to a week, while with flu, people seem to notice loss of smell after a few weeks, according to the scientists.

“Loss of smell has been reported with flu, but it’s definitely more frequent with SARS-Cov-2. What’s more, it happens a lot earlier in infection with SARS-Cov-2,” said Heaton, who has developed tracking tools to study respiratory virus transmission. “From a public health standpoint, this is a blessing in disguise, because it helps people to realize that they should stay home and keeps them from transmitting the virus to others.”

Moseman studies the immune cells of the nose that form a barrier against pathogens.

“Part of being an immune barrier is getting killed sometimes and rebuilding yourself — that’s what they’re designed to do,” Moseman said.

He suspects that the long-lasting smell loss observed in some COVID-19 patients is related to the immune system’s inability to restore the damaged barrier.

“Overall, we want to understand the ramifications of SARS-Cov-2 infection on sense of smell, on the ability of the olfactory system to regenerate itself, and protect against future infections,” said Moseman. “Understanding how the immune system responds to SARS-CoV-2 could also assist in developing therapies down the road.”

They Happen to Be Here

Moseman said that Duke’s unique interdisciplinary expertise in olfaction is what convinced him to join Duke as a Translating Duke Health Scholar in 2018, after completing a postdoctoral fellowship at the National Institute of Health.

“There are not many universities where you’re going to have so many experts in olfactory work — and all in different departments — all in one place, and they happen to be here,” he said. “It gives us a pretty unique group of people who can answer these pressing questions.”

The team recently applied for National Institutes of Health (NIH) funding to analyze olfactory samples taken from people infected with COVID-19. If awarded funding, they will use single-cell RNA sequencing to identify changes in the cellular and molecular composition of the samples as a result of SARS-CoV-2 infection.

“We wanted to focus on the mucus membrane because it is an accessible tissue in humans, and a likely site of pathology for coronavirus infections,” said Matsunami. “Not only that, it houses many types of cells, including olfactory sensory neurons, which have a direct line to the central nervous system. Healthy functioning of these neurons is necessary in order for a person to be able to smell.”

If awarded the funding early next year, the scientists will dissect the immune response within the olfactory tissues from human COVID-19 patients and in mouse models, to gain understanding of what changes are occurring and how these might explain short and long term sensory disruption.

For Goldstein, the most important outcome of the research would be to determine the target for development of therapies to help patients who suffer from smell and taste loss regain these senses. In a society where so much immediate sensory enjoyment is based on sight and sound — imagine any major blockbuster action movie — smell and taste don’t get as much of the limelight, he said. But once they’re gone, their importance is immediately recognized. In addition to facilitating the enjoyment of a meal, they also keep us safe, helping us sniff out smoke from the stove or a gas leak. And thanks to the way the sensory system is wired, they help us remember key moments in our lives.

“Everyone knows that feeling of smelling something you haven’t smelled for a long time, how it immediately triggers an old memory and the feelings associated with it like ‘Oh that reminds me of going to visit grandma when I was little and she would make these cookies.’ Ultimately, we want to help people recover this important sensory function that is connected to so many wonderful memories.”

This story was originally published on the Duke University School of Medicine's Magnify website.