$2.1 Million Gift is Latest in the Mario Family's Contributions to Innovation in Education and Health Care 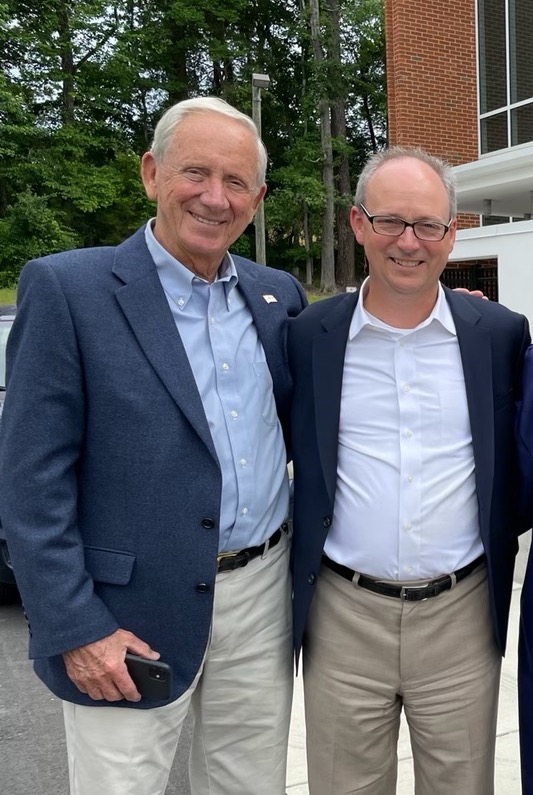 Ernest Mario, PhD, the second-longest-serving trustee in Duke University's history, has also had a deep connection to Duke University Health System (DUHS) for more than 30 years.

Mario and his family, through the Mario Family Foundation, recently made an important new gift that builds upon their past support and will nurture innovation in health care and patient experience for years to come.

The $2.1 million gift includes $1.1 million to establish the Mario Family Chronic Care Management Improvement Fund, which will provide annual grants to faculty physicians to pursue projects to improve care coordination and patient navigation for people with complex and chronic disease. This endowed fund honors Mario's wife of almost 60 years, Mildred Mario, who died in 2020 after a battle with cancer.

The remaining $1 million will support priorities in pediatric gastroenterology, surgery, and cancer.

He served as a trustee of Duke University for 18 years, from 1989 to 2007. In 2009 he was awarded The University Medal, Duke's highest recognition of service to the school.

In 1998, when DUHS was formed as a distinct entity within Duke University, he was invited to be the founding chair of the DUHS board of directors. He served as chair until 2007.

Organizing the health system as an entity that would be incorporated separately from the university was controversial at the time, but it was a necessary step for growth, Mario said. "The health care arm needed to form alliances and make its own decisions," he said. "It was a risky thing to do. But it turned out to represent a pattern that a lot of places have followed since." Today DUHS has grown into a world-class health system and health care network that contributes to the university’s mission to serve the local community, the state, and the world through leadership in the health sciences.

Ernest and Mildred Mario have had many reasons to feel connected to Duke. Two of their three sons received degrees at Duke University, and later, the health system provided excellent and compassionate care to Mildred and to other members of her family. "Duke has connected to our family in so many ways," said Jeremy Mario, BS'92, MBA'96, the youngest of Ernest and Mildred's three sons, who runs the Mario family office.

"Duke has a place in my heart," Ernest Mario said.

Jeremy Mario, who currently serves on the Duke University School of Medicine Board of Visitors, said his Duke education helped broaden his interests and introduced him to lifelong friends as well as his wife, Jennifer Huntley Mario, AB’92. “The people that I spent time with here during my undergraduate years have been some of the most important people in my life outside of my family,” he said. He earned an undergraduate degree in computer science but also completed requirements for degrees in math and economics, the latter of which led to his graduate work in health policy and economics.

The family's latest gifts build on their past support of Duke Health and Duke University to improve health care and support education. They created the Mario Family Foundation Scholars Program in the Department of Medicine to support early career physician-scientists, as well as the Gregory Mario and Jeremy Mario Professorship in the Fuqua School of Business, among many other generous contributions.

Ernest and Mildred Mario set up the family foundation in 1997 to help further the values that made it possible for them to achieve great success from humble beginnings. Neither of Ernest's parents, both first-generation immigrants, had a college education, but he was able to earn a PhD, become a pharmacist, and build a successful career in business.

The success was attainable because of "free minds, free markets," the mission at the heart of the Mario Family Foundation, Jeremy said. "Those American values are what created an opportunity that didn't exist in the old world for my grandparents."

Born in Brooklyn to German immigrant parents, Mildred was educated in New York City public schools and was awarded a scholarship to Hunter College, which she did not attend because her mother disapproved of women attending college. After raising their three sons and skillfully supporting Ernest in his executive career, she became the chair of the Palo Alto Historic Resources Board and then president of the statewide California Preservation Foundation.

"My mother had a number of different careers in her life, but the thing that was always central to her was the family," Jeremy said. “Duke became ‘her school’ because of the opportunities it offered to so many members of the family.”