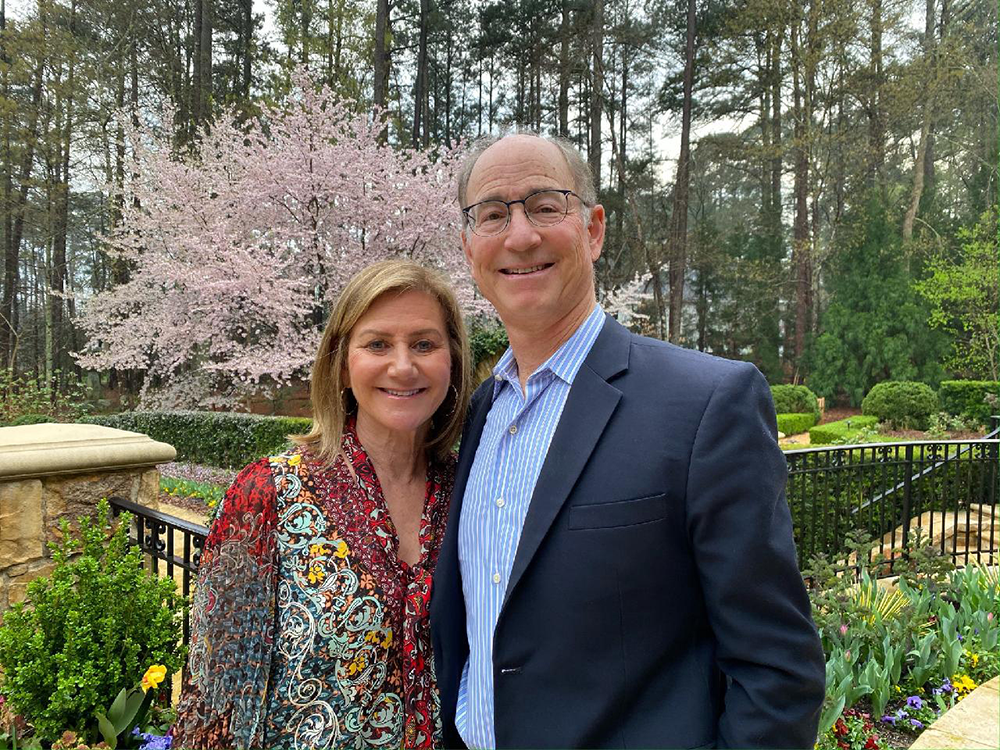 Doug and Stefanie Kahn are very familiar with the statistics.

The Centers for Disease Control and Prevention estimates as many as 5.8 million Americans had Alzheimer’s disease in 2020, and this number is expected to nearly triple in the next 30 years. Worldwide as many as 50 million people have Alzheimer’s.

And unlike heart disease and cancer, rates of death from Alzheimer’s disease are rising.

But Alzheimer’s disease is more than just numbers. When their fathers both developed the disease, Doug and Stefanie experienced firsthand the devastation Alzheimer’s causes. The experience impelled them to try to do something to help. Initially that meant diving into the subject and learning all they could. They spent two days in 2012 meeting with Duke physicians and researchers learning about Duke’s neurodegenerative disease research programs.

At that time they were parents of two Duke students — their third child eventually attended too — and were active volunteers and donors, having supported Duke athletics, the Nasher Museum of Art, the holiday card campaign at Duke Children’s, and more. But Alzheimer’s was personal, leaving those with the disease an ever-diminishing quality of life and little hope of that changing as research had yet to yield promising leads.

In response to the deprivation and isolation the disease can cause, in 2014 the Kahn family was instrumental in launching Reflections, an interactive program at the Nasher Museum designed for visitors with Alzheimer’s and their families. The program continues today and is an important part of the museum’s programming.

Next, in 2016, they tackled the science: establishing the Kahn Scholars Program, an annual competition to provide seed funding for three to four innovative high risk/high reward projects in hopes of generating research with the potential to go on to win federal funding and lead to breakthroughs and treatments.

“Our seed grants ultimately led to the participating researchers being awarded seven or eight times the initial amount in follow-on funding from NIH,” said Doug. “These were nice successes given that the payoff for basic science research can take a long time. Even the failures were good, as they ruled out areas and led the research in new directions.”

Building on that earlier effort, the Kahns’ most recent gift of $1 million establishes the Kahn Family Alzheimer’s Disease Research Center Fund to support the operating expenses of the newly established Alzheimer’s Disease Research Center (ADRC). The Center, a collaboration with the University of North Carolina at Chapel Hill, is one of a network of only 33 National Institutes of Health-funded ADRCs in the country, and the only one focused on gathering data in pre-symptomatic, young, and diverse populations.

The researchers hope that identifying biological processes before memory problems surface may lead to tools for earlier diagnosis and determine new targets for treatments that prevent or delay onset.

“It’s important to start recruiting people who are in early to middle adulthood and have a major risk factor for developing Alzheimer’s or dementia in the future,” said Heather Whitson, MD, professor of medicine, director of the Duke Center for the Study of Aging and Human Development, and co-director of the Duke-UNC ADRC. “That’s where the scientific payoff is — to understand what’s going on early.”

The Kahns’ support will help further this important effort.

“The Kahns’ gift is pivotal,” said Whitson. “It allows us to seize on emerging scientific opportunities, such as rapid innovations in blood-based biomarkers, and cover unanticipated expenses like replacing failed equipment not covered by NIH funding. It also gives us the ability to care for the people in our study better. The ability to reduce financial barriers for study participants helps build a more diverse and inclusive evidence base.”

Both fathers lived with the disease’s progression for 10 years, having almost no quality of life for the last few years. This is an experience they would like to spare other families. “Personally, and I know Doug agrees, we would like no family go through what we have gone through,” said Stefanie.

Their gift honors their fathers Donald Schneider and Mike Kahn, and their desire to see progress made in addressing the causes of the disease and developing treatments and cures. Doug and Stefanie Kahn’s hope is that “a big, audacious” effort will turn the tide against the disease and bring relief to millions of sufferers, and their families and caregivers.

When asked “Why Duke?” the Kahns’ answer is simple.

“It’s all about excellence,” Doug said. “In everything we do, whether it is the Nasher or Duke Health, we aspire to excellence.”

For more information, visit Duke ADRC. To learn how you can make an impact and support Alzheimer’s disease research at Duke, please contact Director of Development Whitney Martin at whitney.w.martin@duke.edu or 919-451-3758.