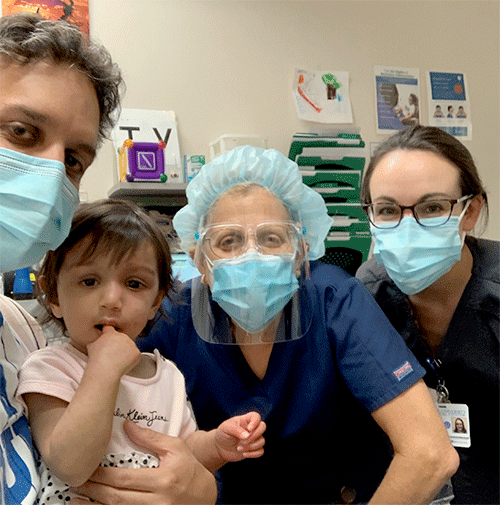 A Parent’s Love and Tenacity Leads to Duke Eye Center, and an Appeal to Innovate

After a normal pregnancy and delivery, new parents, Nimesh Nagarsheth, MD and his wife Benita were thrilled to welcome their baby daughter Kiara Indie on July 4, 2019. However, within minutes of her birth, medical staff observed that Kiara’s body was covered with wide-spread port wine marks and other potential abnormalities were also quickly detected. In order to gain full visibility to Kiara’s condition and identify any discernable health issues, the medical staff at Mount Sinai Hospital in New York City, performed a full body MRI and ultrasound, neither of which confirmed clear findings.

Recognizing that port wine marks can be characteristic of Sturge Weber Syndrome (SWS), a rare disorder, Kiara’s parents quickly became passionate advocates for her medical care. Other possible health challenges caused by SWS can include seizures, glaucoma, hyperreflexia and attention deficit and hyperactivity disorder (ADHD). For this reason, Nagarsheth, a former Duke OBGYN resident and now Director of Gynecologic Oncology and Robotic Surgery at Englewood Health, NJ and Clinical Professor at the Icahn School of Medicine at Mount Sinai continued to pursue an understanding of her condition from specialists across the U.S. His persistence helped to uncover that Kiara also had several ongoing issues in her left eye, including elevated eye pressure (ocular hypertension), as well as mild haziness of the left cornea and possible accelerated left eye growth.

It was during this discovery and assessment period, when several of the nation’s leading pediatric ophthalmologists, practicing at hospitals like Mt. Sinai, Johns Hopkins and UC Davis, recommended that Kiara’s parents seek insight and treatment from Duke Eye Center’s Sharon Freedman, MD, professor of ophthalmology and pediatrics division chief – a world renowned expert and foremost authority on childhood glaucoma.

While in the process of connecting with Freedman, the onset of COVID-19 presented the entire medical community, including patients and their families, with a variety of unexpected and widespread constraints. In Kiara’s case, not only was the much-needed local out-patient monitoring of her eye pressure a hurdle (since at her young age, she was uncooperative and consequently requiring anesthesia), the family lived in New York City and with travel restrictions in place, an in-person evaluation with Dr. Freedman was out of the question. Therefore, they turned to telemedicine.

Nagarsheth researched and purchased an iCare rebound tonometer and a hand-held retina camera, outfitting himself with the equipment necessary to perform at-home evaluations of his daughter’s eye pressures and the appearance of her optic nerve. This proved to be especially valuable – enabling him to present detailed measurements and visuals of Kiara’s condition to Freedman. In-home eye pressure monitoring can provide invaluable information to the treating physician and the patient’s family, in cases of known or suspected glaucoma, especially when it provides real-time pressure values at different times outside of normal office hours. Although not yet widespread in its implementation, Freedman believes home IOP monitoring will increase in prevalence in the future.

With help from generous philanthropy (Sarah’s Saving Kids Sight fund and Children’s Eye Foundation), Freedman has developed an “iCare lending library” which allows her to enroll selected patients for home monitoring of eye pressures over a period of weeks to months, to optimize management for childhood glaucoma.

Following several telehealth visits and email exchanges with Freedman, Nagarsheth determined that Kiara should receive treatment at Duke Eye Center, and in September 2020, Nagarsheth accompanied his daughter to Durham for in-person evaluation. 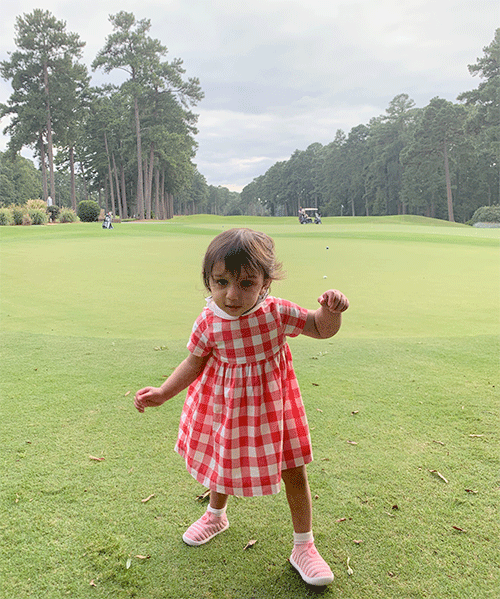 Freedman conducted an examination, first in the office, and then under anesthesia. In keeping with an institutional review board-approved protocol, she used an investigational overhead-mount (FLEX) to enable Spectral Domain Optical Coherence Tomography (SD-OCT) imaging of Kiara’s optic nerves, maculae, and the choroidal hemangioma in the affected left eye. They concluded that her left eye did indeed have mild glaucoma (rather than simply ocular hypertension) and immediately performed a Goniotomy surgery in the left eye, to open the trabecular meshwork, allowing aqueous humor to bypass that tissue and flow directly into the canal of Schlemm.

“Kiara tolerated the surgery well. We’re now monitoring her optic nerve carefully while she continues to be treated with eye drops to lower the pressure as much as much as possible,” Freedman said. “We look forward to her follow-up visit in about six months. At that time, I will reevaluate the optic nerve with OCT using our FLEX imaging protocol.”   This imaging will either confirm stability of, or show progression of pressure-related changes to Kiara’s left optic nerve which would necessitate additional pressure-lowering intervention.

During her brief recovery, Nagarsheth and Kiara stayed nearby the Duke Eye Center – even getting to enjoy the local area. In the months since surgery, Freedman has developed a valuable collaborative relationship with Kiara’s ophthalmologist in New York City; this has been beneficial in her post-op care and ongoing treatment.

“Dr. Freedman, and every team member at Duke Eye Center involved in Kiara’s medical treatment, provided our daughter – and by extension, us as her parents – with exceptional, personalized care and a sound strategy for improving her long-term eye health,“ said. Nagarsheth. “As a physician myself, I understand the challenge of meeting the expectations of hopeful patients. I admire Dr. Freedman’s skill and approach to patient care and understand why she was repeatedly recommended to us by her ophthalmology colleagues nationwide.”

“Dr. Freedman, and every team member at Duke Eye Center involved in Kiara’s medical treatment, provided our daughter with exceptional, personalized care and a sound strategy for improving her long-term eye health."

Nagarsheth, being a clinician-scientist, wanted to know more about the research being conducted on SWS so he found some of the leading investigators across the country; and was even able to connect them with one another for collaborative efforts.

Duke Eye Center is set to be a testing site for an upcoming experimental drug — currently in development at Qlaris Bio — that is intended to help lower the episcleral venous pressure. The first patients expected to receive the treatment will be adult patients with Sturge Weber Syndrome-related glaucoma or elevated eye pressures.

When asked about what he’s discovered as both a doctor, and a father, throughout this journey of seeking solutions for Kiara’s medical issues (particularly during the time of the COVID crisis), Nagarsheth said, “Our challenge as medical professionals is to continually innovate and create treatment tools and techniques that are accessible for at-home use – making it easier for patients and their families to become advocates for their own health. As a parents and caregivers, we must be the advocate, seek resources to ensure the best care available, learn more about research that may help find more answers and do what we can at home to minimize invasive procedures,” he continued. “By doing so, parents and caregivers become empowered members of the support team – working with us for positive patient outcomes.”

Kiara is a true rock star literally and figuratively. In December 2020, just 3 months after her surgery at Duke, Kiara (along with her 5 year-old sister Alina) released her first album of original music which is now available on Spotify, Amazon, Apple Music and other sites making her quite possibly the youngest artist ever to accomplish this. Check out the album here.

This story was originally published by Duke Eye Center.