Getting Personal with Blood Cancers 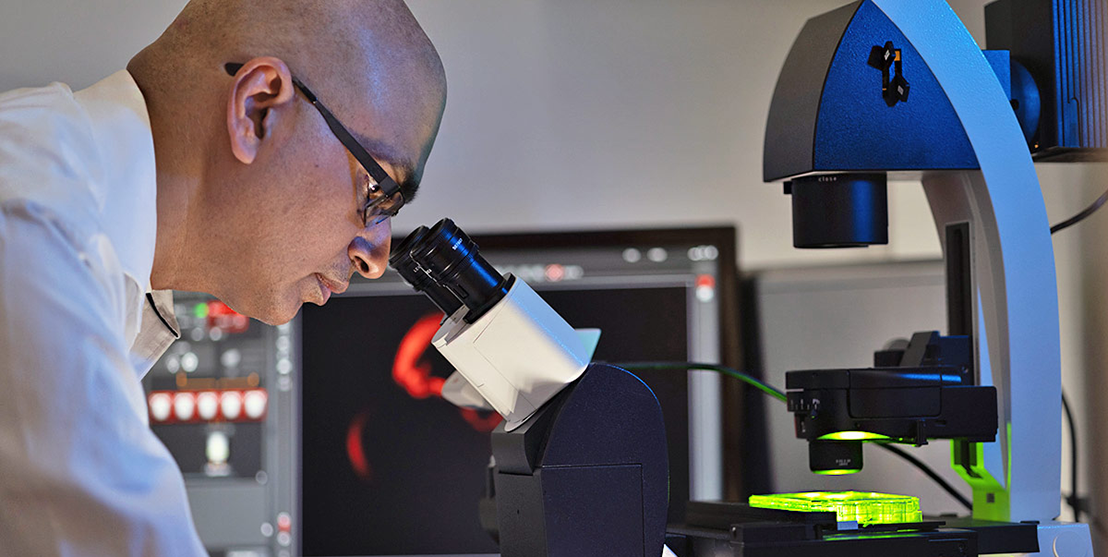 For most cancers, advances in genomics haven’t changed treatment strategies very much. Sandeep Dave, MD, MS, envisions making personalized treatment a reality for more patients, by developing and making better use of tools that already exist.

“What’s taking so long?” Sandeep Dave, MD, MS, was perplexed as he evaluated a patient who had been at Duke University Hospital for nearly a week awaiting test results to confirm a possible lymphoma diagnosis.

That was back in 2012, and the same situation happened far too often. Patients with a suspicion of blood cancers endured seemingly endless testing and agonizing waits to pinpoint an initial diagnosis from the more than 100 different types of blood cancers.

Meanwhile, just a 10-minute walk away, Dave’s genomics research lab routinely conducted research studies in which they could get a readout of a tumor’s complete genomic makeup within a day or two. “It was very frustrating that the technology existed in my lab but could not be immediately applied to patients,” Dave says.

Unfortunately, the situation is still much the same for patients today.

Genomic sequencing of tumors reveals reams of information that can be used to diagnose and treat cancers. But even at advanced treatment centers like Duke, that analysis happens routinely only for late-stage cases, and not for initial diagnosis. At community treatment centers, it may not happen at all.

Why? Because of the complexity of genomics, costs remain too high for clinical labs, too few clinicians know how to interpret the results, and too few treatments exist that target specific genetic mutations, according to Dave.

Dave, professor of medicine, envisions a better way. The key, he says, is that the genomics tools that already exist must be better developed so they can be used systematically and on a larger scale. Then they could replace many of the slower, more expensive diagnostic tools.

About the same time that Dave’s frustrations in the clinic were mounting, his research group was already conducting genomic analyses on a larger and larger scale. So, they set a goal: to systematically map the genomic makeup of every type of blood cancer. Such systematic studies are the key to giving patients more precise diagnoses and more targeted therapies, he believes. By contrast, most studies so far in the field have focused on only the 15 or so most common types of blood cancers.

As results emerge, Dave’s team uses their findings and gene-editing technology to make new mouse models that more accurately reflect the complex combinations of mutations and other conditions that drive cancer in the real world. Those models help them develop and test more personalized treatments.

The task seems daunting, but advances in genomic sequencing and computing analysis mean Dave’s team has been able to stay the same size while studying an ever-increasing number of patients and unraveling the complexity of cancer genomics.

For instance, in 2012, Dave’s team published a paper in the journal Nature Genetics, in which they provided a complete genomic picture of just one patient—the first completely sequenced genome from a Burkitt lymphoma tumor as well as the patient’s germline DNA (the genome they were born with.) By 2017, they had scaled up—they published results in the journal Cell in which they analyzed tumor samples from 1,001 patients with B cell lymphoma, detailing more than 100 genetic drivers of the disease.

Today, collaborating with institutions all over the world, the team is studying the genomic makeup of tumors from more than 10,000 patients with all 100 different types of blood cancers.

Dave says that the results from their current studies should emerge in the next year. “The results will allow us to combine patients across different cancer types for enrollment in clinical trials that use drugs that target their shared genomic drivers,” he says.

The study promises to provide the most thorough understanding yet of what drives these cancers.  “I do not know of anyone else who is doing this in such a comprehensive manner,” says Nelson Chao, MD, MBA, Donald and Elizabeth G. Cooke Professor and Chief of Duke’s Division of Hematologic Malignancies and Cellular Therapy.

Analyzing all that data requires the most powerful computers available, but most of their analysis is done in the cloud. “By taking all these individual pieces of data and aggregating them, and running the analyses in a mostly automated fashion, we take away the need for individuals to manage computing infrastructure and do small-scale analyses,” Dave says. “That allows a group like ours, which is tiny compared to the number of patients, to manage data that is literally one of the largest datasets ever created in this field.”

It's a far cry from when the team was first starting out at Duke, and Dave, who majored in computer science as an undergraduate, and several lab members bought components and hardware and built their own servers. “It’s basically like manufacturing a custom computer, but many of them, and then connecting them so they can talk to each other,” he says. These home-built machines lived in their wet lab, squeezed in “around tissue culture hoods and behind benches that were used for mouse dissection,” he says.

Dave points out that the Human Genome Project, which sequenced and mapped all of the genes that make up human DNA, took more than a decade and cost $3 billion dollars by the time it was completed in 2003. Today, the same work can be done in two days for roughly $3,000, he says.

He hopes to apply some of the same strategies to make genomic testing and analysis easier and less expensive for clinical labs. Most clinical labs have a high-throughput genetic sequencer. But, Dave says, it’s often used only to run carefully selected tests that measure a panel of disease-specific genes. Because of the complexity of genomic data analysis, most clinics send samples to outside companies. That adds to the time and cost.

Dave envisions clinical labs using an “out-of-the box” kit to run a test using the sequencing equipment they already have, then connecting to software in the cloud for analysis. “The technology already exists to make these connections in less than two days,” Dave says. “The person analyzing the results doesn’t have to be housed in the same four walls as the clinical lab,” Dave has founded a company, Data Driven Biosciences, to develop such computing tools and chemical assays to “make genomics ubiquitous.”

Chao says that making genomics more commonplace in cancer diagnosis and treatment is the only logical way forward. “We know there are clear genetic markers for efficacy of a drug, and we have the ability to obtain that knowledge,” he says. “Once these genetic factors are understood, and the cost of sequencing is low, it will become standard of care.”

A New Vision for Drug Development

A challenge with this more personalized diagnostic method is that drug development has not kept up with advances in genomics. “We know in large part the genetic alterations that make up many common cancers. But that hasn’t necessarily led to a clearer understanding of how to connect that with therapy,” Dave says.

Part of the reason is the way that success or failure of new treatments is determined. “In the current model of drug development, if less than 20 percent of patients in a trial respond to the drug, then the drug is frequently abandoned,” he says. “That means that a drug that may be a lifesaver for some people never makes it to market.”

Dave sees that as a huge, missed opportunity. Why not use genomics in all clinical trials, to understand the subset of patients for whom the drug does work? “If you have genomic technologies that are applied systematically, you can delve deeper into understanding the 10 percent of patients who responded, because maybe we can find them again and define those patients for whom this drug is effective,” he says.

That would be a big change. Dave is committed to bringing together groups from academia and the pharmaceutical industry to make it happen. “That is part of the joy of working at an academic medical center,” he says. “By their power to convene, academic centers can move this equilibrium in favor of the patient.”

The world needs answers. And it needs them now. That’s where Duke Science and Technology comes in.