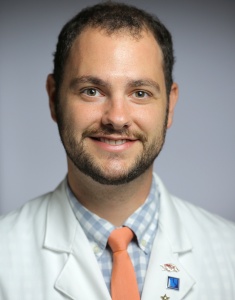 When Brian Sullivan, MD was in college, his grandmother was diagnosed with colon cancer. Despite undergoing colonoscopy screenings every three years, her cancer was not identified early. “I learned how truly devastating this disease is. She experienced unimaginable suffering that I had never seen before,” says Sullivan, a third-year Killenberg-McLeod gastroenterology clinical and research fellow.

According to the American Cancer Society, colon cancer is the third leading cause of cancer-related death in the United States, and the lifetime risk for developing it is one in 22 for men and one in 24 for women. The society estimates that over 50,000 people will die from colon cancer in 2018.

Sullivan seeks to predict who is at the highest risk for developing this cancer and then to identify the best and most efficient screening method for people in that group. ”Colonoscopy is not a perfect test, but currently it is the gold standard, even though it is invasive and uncomfortable,” he says. “Furthermore, about one third Americans are not up to date on their colorectal cancer screening, and they are especially at risk, because most of the new cancer diagnoses are found in people who are not getting screened.”

Sullivan strives to unlock the genetic secrets of colon cancer. He wants to identify mutated genes that may predict cancer. He believes this knowledge will one day lead to the development of simple, non-invasive blood and stool testing, which will reliably identify not only cancer at an early, treatable stage, but also precancerous polyps in the colon so that doctors can remove them before they develop into cancer. “I think we can potentially create a future where colon cancer and maybe even screening colonoscopies are not an issue. But until that day comes, keep getting screened.”