When Fundraising Is Personal 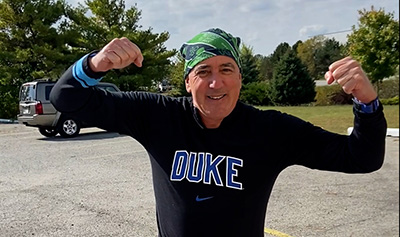 John Harkey and Jonathan Levin have a 25-year friendship built on trust. They first met through work; Harkey was assistant treasurer at Eli Lilley and Company, which was a client of the investment banking company that Levin worked for. “I found Jonathan to be the consummate professional, always there to help us,” Harkey says.

Working together on large financial transactions, the two built up a sense of trust. And even as Harkey moved on to a different role at work, they managed to stay friends. Levin lives in New York, and Harkey lived in Indianapolis, but they would get together as often as their travels allowed. “Every time I’m in New York, as often as I can, we sit down and have breakfast,” Harkey says.

Harkey is retired now and lives in Florida, but they remain close, talking a few times a year. “Jonathan is one of the most positive, uplifting individuals that I know,” Harkey says. “He’s on the very short list of people for whom I would do anything.”

So in spring 2020 when Harkey got a phone call from Levin with the news that he had just been diagnosed with pancreatic cancer, “I was pretty shook up,” Harkey says. “I thought, ‘I have to do something.’”

John Harkey and Jonathan Levin have a 25-year friendship built on trust. “He’s on the very short list of people for whom I would do anything," Harkey says.

An avid bicyclist, Harkey has ridden 100 miles in one day to raise money for the Juvenile Diabetes Research Foundation. So it didn’t take him long to decide that his “something” would be to dedicate his next bike ride to raising funds and support for cancer research, in honor of his friend.

Levin suggested Duke Cancer Institute (DCI) as the recipient because Levin serves on the DCI Board of Advisors and is a Duke alumnus.

Harkey sent an email with a personal story about his friendship with Levin to about 40 or so of Levin’s friends, most of whom Harkey had never met. Almost all of them wrote him back. “We all get so many random email blasts and get inundated with requests for funds. If you’re going to raise funds like this, your request has got to be personalized,” Harkey says. “You have to be ready to be vulnerable and talk about why you’re doing what you’re doing.”

Harkey rode 40 miles in one day in October 2020, raising more than $17,000 on his own. Members of the DCI Board of Advisors formed a team and completed individual rides as well, bringing the total raised in Levin’s honor by the “I Ride for DCI” campaign to more than $23,000.

The personal fundraising page that Harkey used through DCI made it easy to track donors and immediately thank people for their support. “I would check the site every day, and when names would pop up on the site, I would send them a thank-you note,” Harkey says.

During the ride, Harkey stayed in touch with Levin during breaks through video chat. He even managed to borrow a Duke t-shirt (albeit a size small) to change into for his ride across the finish line. “I went to Indiana University, so I must admit that I’m not a Duke fan,” Harkey says with a laugh. “I sacrificed my pride and my quads for Jonathan that day.”