The 2012 London Olympic Games played out like a fairy tale for Abby Johnston McGrath, MD’18. She stood on the podium, watching her country's flag rise up as they put a silver medal for synchronized diving around her neck, and she was inspired to continue diving at the 2016 Olympics. “It was amazing," says McGrath, who recently started her first year as a resident in emergency medicine at Duke Hospital. “I wanted to go back to another Olympics, but I also had dreams of becoming a doctor. I felt that the two conflicted with each other, and the possibility of training for the Olympics would mean putting my medical career on hold,” she says.

But a chance encounter in the McDonald’s restaurant in the Olympic village in London changed her entire career. McGrath was sitting next to Gevvie Stone, an American rower from Newton, Massachusetts, and they started talking. She learned that Stone was a medical student at Tufts University at the time of the Olympics. “That was a light bulb moment for me,” she says. “I realized that I could pursue both. I could go to medical school and I could also train for the Olympics, and that they weren't mutually exclusive. And at that point, I decided to go for both.” 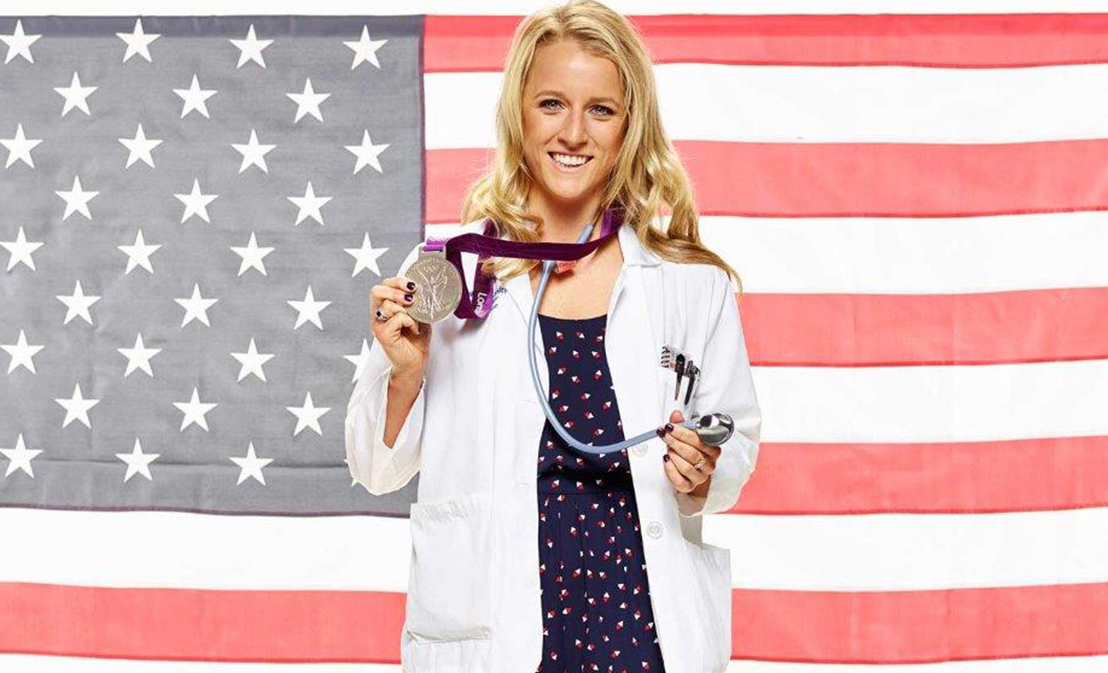 In 2014 she came to Duke University School of Medicine. “I knew that Duke was a type of place where I would be supported and encouraged to pursue what I wanted in the classroom and also in the pool,” she says. “The school’s administration allowed me to change the curriculum and do the clinical rotations in my third year instead of the second year in school in order to accommodate my competition schedule for the Olympics.” McGrath received a Davison Club Scholarship that made tuition financially viable for her and allowed her to train and compete.

McGrath competed throughout her first and second year of medical school. She earned the honor of competing in the 2016 Olympics in Rio, where she ended her diving career. And as bittersweet as it was to close that chapter of her life, she was excited to come back to Duke and enter a career in medicine.

“All of that wouldn't have been possible if it weren't for the scholarship that I received from Duke in order to pursue that path, because, shockingly, there aren't huge NBA-sized bonuses and endorsement contracts for diving. Nobody wants you to wear their Nike shoes. I had to rely on my brain and medical school in order to get there,” says McGrath.

Last year McGrath married Sam McGrath, the Duke football team’s quality control coach, whom she met at Duke. “I was leaving diving practice, and I guess I dropped my ID card right outside my car door. He pulled into my spot right after I left and found the card and emailed me,” says McGrath. ”When we met up, he gave me back my card and asked me on a date.”

Last month McGrath started her first year out of three as a resident in emergency medicine at Duke University Hospital. “My athletic career taught me a lot about teamwork, and that is critical in emergency medicine when you have a variety of different providers that you have to communicate and work well with in intense situations,” says McGrath. “In trauma care, all hands are on deck, and you work with surgeons, nurses, and techs. Drawing on my experiences, being in a high pressure situation and knowing what my role is has been helpful in the emergency room.”

“All of that wouldn't have been possible if it weren't for the scholarship that I received from Duke in order to pursue that path, because, shockingly, there aren't huge NBA-sized bonuses and endorsement contracts for diving. Nobody wants you to wear their Nike shoes. I had to rely on my brain and the medical school in order to get there.”