Helping Duke Give Back to the World 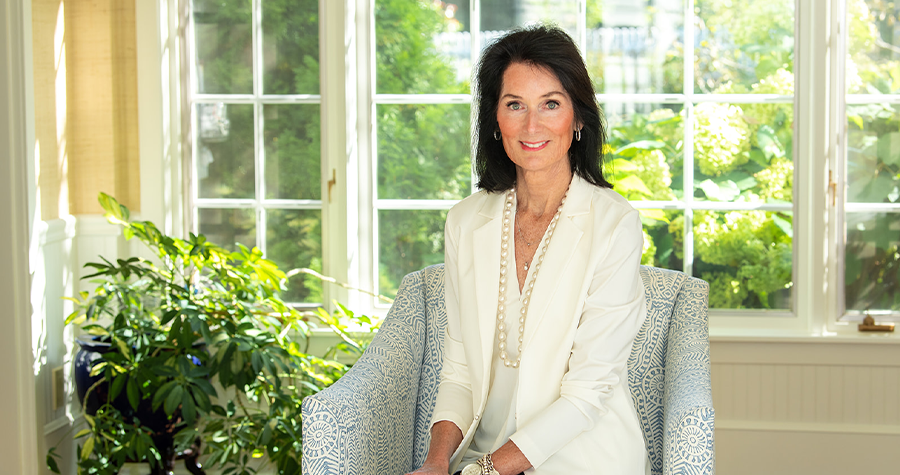 Duke alum Leslie Graves has known about Duke’s mission to provide life-changing cancer care since she was a teenager. Her father was a childhood friend of legendary cancer surgeon William Shingleton, MD, when the two were growing up in eastern North Carolina.

In 1973, when Shingleton became the founding director of Duke Comprehensive Cancer Center (now known as Duke Cancer Institute), Graves’ father, John Graves, a Duke alum, began supporting the effort. “He felt like that it was such an incredible organization, and he talked to me about it,” Graves said. “He was super proud of his childhood friend.” 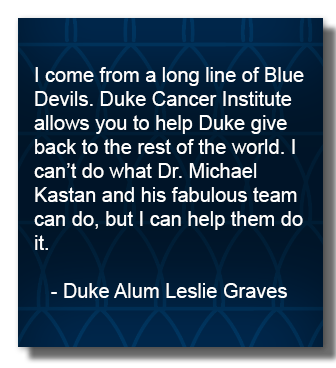 She witnessed firsthand the compassionate care Duke provides when her father was treated for bladder cancer. “He felt they took really great care of him, extended his life, and honored his wishes about his treatment,” Graves said. He sadly lost his battle with the disease in 2009.

Graves serves as treasurer of the Fibromalellar Cancer Foundation, and in 2017 she joined the Duke Cancer Institute Board of Advisors. She served as vice-chair for four years, and in 2022 she began serving as chair. In October 2022, Graves received the William W. Shingleton Award, the highest honor given to friends of Duke Cancer Institute.

“I come from a long line of Blue Devils,” Graves said. “Duke Cancer Institute allows you to help Duke give back to the rest of the world. I can’t do what Dr. Michael Kastan and his fabulous team can do, but I can help them do it,” she said.

While her daughter, Elizabeth, attended Duke and played lacrosse, Graves organized an annual game benefiting Duke Cancer Institute. She has also supported the Duke Center for Brain and Spine Metastasis. Most recently, she made a planned gift and a special gift honoring Duke cancer’s 50th anniversary.

“You don’t have to give at a high level,” she said. “Whatever anyone can do will help.”